An allowance/optional claiming race for two-year-olds at six furlongs on dirt is the feature race on Friday’s card at Gulfstream Park.

The field is down to just four, following the morning  scratch of Francesco Appeal for what the Gulfstream Web site noted as “veterinarian” reasons.

The remaining runners all have one win and potential as stakes horses. Thus, it should be a fun race for watching if not for betting.

Five races are scheduled for turf.  The Weather Channel Forecast is for a 15 percent chance of rain during racing hours in Hallandale Beach, where Gulfstream is located.

By placing the small field feature as the second race, Gulfstream kept it out of the Rainbow 6 and the Late Pick 5.

The others in the field are Sweetontheladies, Chatiment and Inkspired.

We will have a preview and coverage this  afternoon on our blog.

There are no stakes races either day.

Gulfstream’s next major stakes day will be Saturday Sept. 3, with eight stakes races including the second legs in each of the four divisions of the Florida Sire Stakes Series. 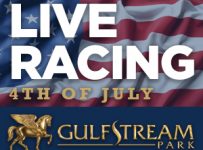 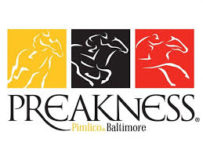