The ninth and feature race at Gulfstream Park on Friday has the look of a stakes race and should have the excitement of one,

The one-mile dirt allowance/optional claimer will be the first race in six months for the colt Saraguaro  (photo on home page) Last fall as a three-year-old he won two 1 1/16 mile dirt stakes—one at Gulfstream and the other in the Gulfstream Park West meet at Calder.

The Friday feature will be a rubber match for the four-year-old colt Yourdreamsormine, trained by Milt Wolfson, and the five-year-old gelding We’re All Set, trained by Peter  Walder.

On May 13 at Gulfstream, Yourdreamsormine won the seven-furlong Bull Gator Stakes by three lengths  over We’re All Set.

On May 26 at Gulfstream, We’re All Set reversed that one-two order when he beat Yourdreamsormine by a  half length in the 6 ½ furlong Sea of Grass Stakes.

Joshua’s Comprise is the race’s only entrant without a stakes win. He has finished second or third in multiple stakes races at Gulfstream and at Calder.

The carryover continues to grow because Thursday was the 19th straight race day without the carryover/jackpot payoff requirement of just one ticket with the winners of all six Rainbow 6 races.

In the feature, We’re All Set is the only horse with a history of early speed.

Rich Daddy and  Johnny Handsome both have two-race win streaks and are serious candidates for the exacta.

But Saraguaro appears to have the best potential, in the long term and perhaps for Friday’s race.

On  Sunday at Gulfstream he worked four furlongs in 45 3/5 seconds—the day’s fastest of 47 works at that distance.

On Nov. 7 he won the 1 1/16 mile Millions Classic Preview at Calder  (photo  on home page).  He  earned a career-high 103 Brisnet  figure in that race, matching Yourdreamsormine for that career high.

Joseph recently told us that Saraguaro was not injured during or after either race.

He added that the horse had previously been a slow developer and might benefit from a break until the summer. 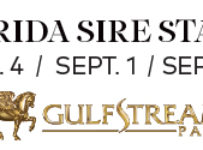