Gulfstream Park will resume racing on Thursday with ten races and first post of 12:50 p.m.

Thursday’s featured sixth race is a $43,000 allowance at one mile on turf for fillies and mares 3-years-old and up/

On  Saturday the Rainbow 6 was hit for $411,188 when there was just one ticket with the winners of all six races.

There is a Super Hi-5 carryover of $4,107.92 on the first Thursday race with seven or more starters.  Barring scratches it would be on the first race.

Last Sunday, Gulfstream’s most recent race day, there were no winning tickets in the last two races on the Super Hi-5. The bet requires picking the first five finishers in correct order.

Thus the pool on the Super HI-5 carries over  to first race on Thursday that has at least seven starters—the minimum needed for the bet.

Thursday’s first race is a $34,000 starter allowance at one mile on turf for three-year-olds and up.  There are eight entrants,  including one that is main track  only.

If scratches reduce the field to six or fewer horses, the fourth race with eight entrants  is the next possible  race for the Super Hi-5.

The second and third races both have just six entrants. 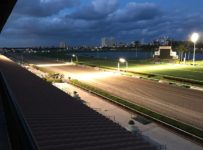