Gulfstream Park has three carryovers on its Wednesday card, starting with $78,838.65 on the Super Hi-5 in the first race.

First post for that race is 12:50 p.m., on a rare Wednesday card for Gulfstream’s summer meet, The card has eight races.

The two other carryovers for Wednesday are:

*Rainbow 6 — $86,148.87. It is on races three through eight.  It is 20 cents only per combination. Multiple horses can be used in each spot, thus allowing multiple combinations.

*Late Pick 5 — $29,977.77. It is on races four through eight. It is 50 cents minimum per combination. Multiple horses can be used in each spot, thus allowing multiple combinations.

More details about the Rainbow 6 and Late Pick 5 may be found in the Latest Racing News scroll on the right side of the home page of this Web site.

The Super Hi-5 requires picking the first five finishers of a race in correct order.  It is $1 minimum per combination. Multiple horses can be used in each spot, thus allowing multiple combinations.

Later on Wednesday morning our blog will have a  preview of the first race, following announcement of any scratches.

Bettors have had two dark Gulfstream  days to handicap Wednesday’s races.  Based  on the history of similar carryovers, it is highly possible that more than $100,000 will be bet on the carried-over Super Hi-5 in the first race.

Wednesdays are usually dark at Gulfstream. The track added Wednesday this week, and will also have its regular Thursday through Sunday racing.

Gulfstream added the card for this afternoon (Wednesday) to build on the momentum of the strong handle in its summer meet that began on July 1.

Our review of data from Equibase charts shows that through this past Sunday, Gulfstream has averaged about $5.2 million in daily average all-sources handle. That puts it ahead of its pace from last year when it averaged $4.6 million a day for the three-month summer meet.

The three large carryovers should help the handle and excitement level for the Wednesday card—on  which  all races are claiming, optional claiming or maiden special weight.

The carryovers are largely a result of 80-1 shot Star Milly winning the 11th and last race on Sunday—the most recent race day at Gulfstream.

The Super Hi-5 has no consolation payoffs such as four of five places.

On Sunday, there were no winning Super Hi-5 tickets on any of the last four races. Thus, the accumulated pool (minus 17 percent takeout in each race) carries over into Wednesday’s first race.

Gulfstream has the Super Hi-5 on all races with seven or more starters.

Wednesday’s first race has ten entrants, including two that are main track only.  It is a $10,000 claiming race at 7 ½ furlongs on turf for 3-year-olds and up.

Brittania’s Moat and Favorite Heir are likely favorites.  Amazon King could be a live longshot, based on back class.

Brittania’s Moat and Amazon King are among four entrants that have shown early speed.  That could help the chances of late-running Favorite Heir. 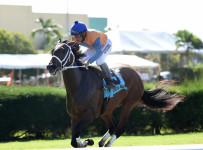