There will be no carryover on Friday on the Late Pick  5.
First post is 1:15 p.m. for the ten-race card.

The Rainbow 6 carryover continues because Thursday was the 15th straight day without the carryover/jackpot payoff requirement of just one ticket  with the winners of all six Rainbow 6 races.

Gulfstream took out 20 percent of the day’s Rainbow 6 bet. It divided 56 percent among tickets with six winners and put 24 percent into the carryover.

The Rainbow 6 is a 20-cent per combination only bet, Bettors can use multiple horses in each race and thus have multiple combinations.

Late Pick 5
On Thursday there was a carryover of $27,149 on the Late Pick 5–a result of there being no tickets with all five winners on Sunday. 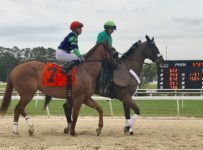