Gulfstream Park is headed into a three-day stretch in which a highlight will be the return on Saturday of Edgard Zayas, one of its leading jockeys.

Zayas has not ridden since May 25, when he suffered a broken rib in a spill during a race at Gulfstream.  He is scheduled to have six mounts on Saturday, and five mounts on Sunday.

There are no stakes races at Gulfstream this Friday, Saturday or Sunday.

There is no first race carryover on the Super Hi-5.

Conditions are fast and firm with five races scheduled for turf.  According to the Weather Channel, there is a 15 percent chance of rain in Hallandale Beach where Gulfstream is located.

The seventh race is a $40,000 maiden special weight at five furlongs on dirt for Florida-bred two-year-old fillies.

There are eleven entrants following the morning scratch of Jax, a Wesley Ward trainee who would likely have been among the favorites.

The featured seventh race is a $44,000 allowance at one mile on turf for fillies and mares three-year-olds and up.

Zayas has the ride on E B Ryder, one of the likely favorites.

Zayas had 39 wins at this year’s Gulfstream spring  meet, which  ended June 30. Even though he missed the last five weeks of the three-month meet, he finished third behind Emisael Jaramillo who had 64 wins and  Eddie  Castro who had 52 wins. 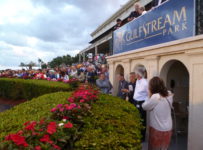