The feature tenth race is a one mile turf allowance for  fillies and mares  three-years-old and up, with a $44,000 purse. The ten-horse field is headed by E B Ryder, the third place finisher in the Spook Express Stakes at 1 1/16  miles on turf at Gulfstream on July 2.

Edgard Zayas will ride E B Ryder, one of his six mounts on his first day riding in races since May 25.  On that day he was involved in a spill in a Gulfstream race and sustained a broken rib and ligament damage in his left knee.

Zayas was leading Gulfstream’s spring meet with 39 wins prior to his injury.  He wound up third behind Emisael Jaramillo and Eddie  Castro, who had 64 and 52 wins respectively.

The Weather Channel forecast is for just a 20 percent chance of rain during racing hours in Hallandale Beach where Gulfstream is located.

On the first race there is a carryover of $1,275.07 on the  Super Hi-5, which requires picking the first five finishers  in correct order. 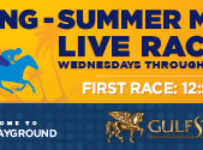