Gulfstream Park will end the fourth week of its summer meet on Sunday with a nine-race card and first post of 1:15 p.m.

Six races are scheduled for turf.  The third, fifth and seventh races are on dirt.

According to the Weather Channel, the chance of rain will increase from 15 percent to 45 percent during racing hours in Hallandale Beach, where Gulfstream is located.

There are no stakes races on the Sunday card.

The seventh race has the day’s biggest purse. It is $55,000 maiden special weight at six furlongs on dirt for two-year-old fillies.

There is a carryover of $181,496 on the Rainbow 6, on races four through nine.  It is a 20-cent per combination-only bet, with multiple horses allowed in each leg, and thus multiple combinations.

On the first race, there is a Super Hi-5 carryover of $2,177.  It is a $1 minimum bet that requires picking the first five finishers in correct order.

Very Very Stella beat Whisper on the Wind by a half length in Saturday’s eleventh and feature race—a 7 ½ furlong turf allowance for three-year-olds and up. The purse was $43,000.

Very Very Stella, at 5-1, was the fifth betting choice in  the seven-horse field.  Jesus Rios rode the four-year-old  gelding for trainer Ralph Ziadie.  The time was 1:29.28 on the course listed as firm.

It was one of Ziadie’s three winners on Saturday.

More details on Gaffalione may be found in the Latest  Racing News scrolling section on the right hand side of the home page of this Web site. 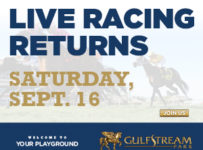 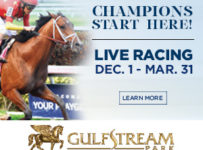