Gulfstream Park will resume racing on Thursday with nine races and first post of 1:15 p.m.

It will be the start of a Thursday through Sunday racing stretch—Gulfstream’s regular four-day schedule for its summer meet.

Three of the six entrants won a stakes race in 2015, when they were three-year-olds. They are Dream of Me, Li’l Meatball and Bullet Gone Astray. None of those three are in Thursday’s race for a tag.

Thursday’s eighth race is the second-to-last leg of the Rainbow 6, on races four through nine.

The Rainbow 6 has a Thu

rsday carryover of  $130,147. It is a 20-cent only bet, per combination.  A ticket can have multiple horses in each race, and thus multiple combinations.

The carryover is growing because Sunday was the 12th straight race day without the jackpot/carryover payoff requirement of just one ticket with the winners of all six Rainbow six races. Such a winning ticket collects the entire carryover and 80 percent of the day’s Rainbow 6 bets.

There is a 20 percent takeout each day on the Rainbow 6.  On days with multiple winning tickets, Gulfstream divides 56 percent of the bet’s handle among those tickets and adds 24 percent to the carryover.

Our review of Equibase charts indicates that, until the jackpot is hit, betting on the Rainbow 6 could be that high again this Thursday and possibly higher on following days.

More bettors will be playing the Rainbow 6.  Some others, especially groups, will be going deeper and including more long-shots as they seek to have the only winning ticket.

Others will be seeking to hit part of the larger pools won by multiple ticket holders.

On Friday, Gulfstream has a ten-race card with first post at 1:15 p.m.  There are no  stakes races  on the card.

Entries for Saturday will be drawn and released on Wednesday afternoon. The Condition Book shows no stakes races on Saturday.

Entries for Sunday will be drawn and released on Thursday afternoon. The Condition Book shows the $75,000 Tangelo Stakes at 1 1/16 miles on dirt for three-year-olds. 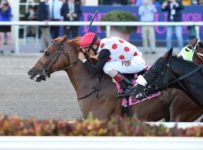