Tampa Bay Downs will have eight race-programs this Thursday and this Friday, the two days of its fourth annual Summer Festival of Racing.

First post on Thursday is 12:35 p.m., with six races scheduled for turf.

First post on Friday is 12:28 p.m., with seven races scheduled for turf.

Many of the entered horses have not raced since the regular part of Tampa Bay’s meet, which ended May 8.  The Thursday and Friday fields also have numerous horses that have raced this month at Gulfstream Park.

Most of the trainers and jockeys are Tampa Bay winter-time regulars who are coming back for two days from Gulfstream or from tracks in northern states.

By racing each of those days and holding its regular race meet in between, Tampa Bay Downs is eligible to be a year-round host track for simulcasting of thoroughbred races from outside Florida,

As host tracks, Tampa Bay and Gulfstream buy signals from tracks such as Belmont Park and Churchill Downs and then re-sell them to other pari-mutuels in Florida.

After July 1, Tampa Bay Downs will be dark until Nov. 26 when it will begin its regular five months of racing. 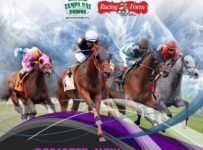 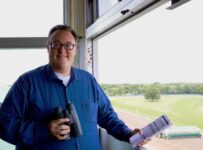