Seven of the races are stakes, all with $75,000 purses.  They are preps for stakes races on the Summit of Speed card, to be run at Gulfstream on July 2.

A full list of Saturday’s stakes is at the end of this article.

Two of the races with deepest fields are the Sea Lily, at six furlongs for fillies and mares 3-years-old and up, and the Royal Palm, at 6 ½ furlongs on dirt for 3-year-old fillies.

Smart Choice Stable’s Fusaichi Red is scheduled to make her 2016 debut in the Sea Lily.

The George Weaver-trained Fusaichi Red has turned in a strong series of workouts at Palm Beach Downs in Delray Beach in preparation for the Sea Lily. The 4-year-old daughter of Fusaichi Pegasus (2000 Kentucky Derby winner) hasn’t raced since finishing fourth in the Fort Springs Stakes at Keeneland Oct. 31.

Following a pair of runner-up finishes at Saratoga as a 2-year-old, Fusaichi Red encountered trouble in a pair of third-place finishes at Gulfstream to kick off her 2015 campaign.

She subsequently broke through with a maiden score at Parx before capturing the Miss Woodford Stakes at Monmouth and finishing third behind Grade 1 winner Cavorting in the Prioress (Grade 2) at Saratoga Sept. 6.

Cornelio Velasquez was named to ride Fusaichi Red, who is scheduled to face seven rivals in the Sea Lily. That includes locally based Grade 3 stakes winners Best Behavior and Dogwood Trail.

The 4-year-old Dogwood Trail will make her first start for trainer Mark Casse.

Tyler Gaffalione has the mount on the multiple-stakes winner Dogwood Trail.

Gelfenstein Farm LLC’s Dearest is scheduled to return to action in the Royal Palm, after a three-month layoff.

The Royal Palm is a prep for the $100,000 Azalea, a seven-furlong dirt stakes at Gulfstream on July 2.

Dearest, a daughter of Midshipman, most recently finished third after setting the pace in the Davona Dale (Grade 2) at Gulfstream on Feb. 27. Cathryn Sophia, who captured that one-turn mile race, went on to win the Kentucky Oaks (Grade 1) at Churchill Downs on May 6.

The Davona Dale runner-up Lewis Bay continued on to win the Gazelle (Grade 2) at Aqueduct and finish third in the Kentucky Oaks.

Prior to the Davona Dale, Dearest launched her career with a pair of impressive victories–a two-length decision in a six-furlongs maiden test at the Gulfstream Park West meet at Calder and a 1 ¼-length allowance score at seven furlongs at Gulfstream.

Multiple-stakes winner Ballet Diva is also among the seven fillies entered in the Royal Palm. The Jacks or Better Farm’s homebred filly is coming off a front-running triumph in the Any Limit Stakes at Gulfstream March 19.

Formerly trained by Gold, the daughter of Hear No Evil is slated to make her first start for Casse.

Orlyana Farm’s My Dear Venezuela, who finished second to Savingtime in the Miss Gracie against older fillies and mares last time out; Arindel’s Pancake, a multiple-stakes winner; and Bell Racing’s Shakakan, a runner-up in her 2016 debut in an optional claiming allowance, also are among contenders in the Royal Palm.

Little Dream’s Racing’s Little Pricilla and Capi Racing Stable’s She Takes Heart round out the field. 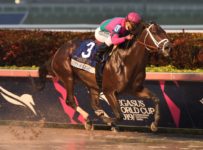