Savingtime gained an elusive first stakes victory for herself and trainer Vaughn Heard on Sunday when she beat My Dear Venezuela by 1 ¼ lengths in the $65,000 Miss Gracie Handicap at Gulfstream Park.

Heard also is the breeder of Savingtime (photo on home page), and owns the horse through her Heardsdale Stable.

The 4-year-old Savingtime came into the Miss Gracie with a record that included second place finishes in three stakes races. Two were at Gulfstream last year and one was at Calder in the Gulfstream Park West meet in 2014.

Still, bettors sent her off at 7-1 as the fourth betting choice in the six-horse field.

Savingtime, with Vicente Guidel riding, was in third place along the rail after a half mile.

She moved to the outside after coming out of the turn, took the lead from pace-setter My Dear Venezuela at the sixteenth pole and went on to win in 1:23.28 on the track listed as fast.

Savingtime earned an Equibase Speed Figure of 103, her all-time best.

Heard said she was not surprised by the strong race by Savingtime, who was coming off an 11-week break and  had been training well at Gulfstream.

“She (Savingtime) also has been running at seven furlongs and some of the others haven’t  gone that  far in a while,” Heard added.

Savingtime is a daughter of Kantharos, one of the leading Florida-based sires of  recent years.  Heard owns Time Bandit, the dam of  Savingtime.

The win in the Miss Gracie was Savingtime’s third in18 career starts.

She has raced three times this year, all at Gulfstream.

On Jan. 18, she won a  seven-furlong allowance/optional claimer restricted to Florida breds.

On Feb. 17, she finished fourth in a nine-horse field in a seven-furlong non-restricted allowance.

Heard then decided to give Savingtime a break from racing until most winter-only horses had been moved back to tracks in northern states by their owners.

Off Sunday’s showing it  appears that Savingtime could be  a factor in distaff sprint stakes at Gulfstream the remainder of this spring and this summer.

*Gulfstream’s next race day will be Wednesday, with a nine-race card and first post of 1:15 p.m.

There will be a new pool in the Rainbow 6, on the fourth through ninth races. It is a 20-cent per combination only bet, with multiple horses permitted in each race.

Gulfstream will have its regular rule of a full payout (minus 20 percent takeout) only if there is just one ticket with the winners of all six races.  Otherwise, Gulfstream divides 56 percent of the day’s bet among multiple tickets with all six winners.

Sunday was a periodic mandatory payout day for the pool and carryover, even with multiple tickets with all six winners 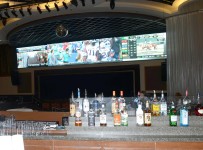