Gulfstream Park has a ten-race card this afternoon with first post of 1:15 p.m.

The feature ninth race is a $25,000 allowance/optional claimer at five furlongs on turf for fillies and mares 3-years-old and up. The purse is $43,000.

Conditions are listed as fast and firm.

According to the Weather Channel, there is a 65 percent chance of thunderstorms this afternoon in the Hallandale Beach area where Gulfstream is located.

We will have coverage this afternoon on our blog.

Today’s racing follows a Saturday on which trainer Mark Casse won his 2,000th career race, with Reimburse in the second race at Gulfstream.

Reimburse after the second at Gulfstream, May 14, 2016, for trainer Mark Casse’s2,000th career win
–photo from Gulfstream

Casse later raised his total to 2,002 with wins at Gulfstream by Cali Cat in the tenth race and by Totally Evil in the 11th race. The win numbers, tracked by Equibase, are for races in the United States and Canada.

Casse, who has horses running in several other states and in Ontario this spring, was not at Gulfstream for his milestone.

Casse is basing a division at Gulfstream during the spring and summer meetings for the first time.

The 55-year-old native of Indianapolis, who resides in Ocala and Kleinburg, Ont., is an eight-time Sovereign Award-winning trainer in Canada and was elected to the Canadian Horse Racing Hall of Fame this year.

Casse has about 50 horses stabled at Gulfstream.

Approximately 20 of those horses are owned by Jacks or  Better Farm, of Ocala.

Through early last month Jacks or Better used Stan Gold as its exclusive trainer in Florida, with considerable success especially in 2-YO races. Last month, for reasons not fully disclosed publicly, Jacks or Better owner Fred Brei moved all of his approximately 20 horses to Casse.

Since then Gold has taken on horses from several other owners, including several who had horses with the recently retired trainer Bill Kaplan.

A match-up of a Jacks or Better horse and one of Gold’s new horses was scheduled for Saturday’s fifth and featured race which had a stakes caliber field.

The field included Best Plan, a Jacks or Better horse making his first start for Casse.

Also entered was My Point Exactly, a former Kaplan horse scheduled to make his first start for Gold.

However, My Point Exactly was scratched on Saturday morning by decision of a veterinarian. So was Conquest Pacemaker, trained by Casse and owned by his long-time client Conquest Stables.

Aire Bueno, at 7-2, held off a late charge by the 3-2 favorite Quiet Force and won by a head. Best Plan Yet, at 6-1, finished a half-length back in third.

Matthew Rispoli rode Aire Bueno, who won in the fast time of 1:33.85 on the course listed as firm. He is trained by Chuck Simon.

Aire Bueno, a 7-year-old gelding, was bred in Chile and raced in that country through 2014.

The win on Saturday was Aire Bueno’s 11th in 37 career starts, including the United States and Chile. 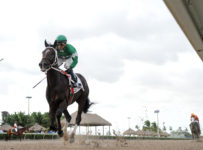