Following a usual dark day on Tuesday, Gulfstream Park will will resume live racing on Wednesday with an eight-race card.

It will be the first day of a regular five-day Wednesday through Sunday race cycle at Gulfstream. First post is 1:15 p.m. each day.

The sixth race is five furlongs on turf for fillies and mares 3-years-old and up. The seventh race is six furlongs on dirt for 3-year-olds and up.

We will have previews and race coverage on Wednesday on our blog.

On Wednesday, Gulfstream will have a carryover of $169,793 on the jackpot-like Rainbow 6 on its last six races–three to eight.

Gulfstream pays out the jackpot of the carryover plus the day’s Rainbow 6 bets (minus 20 percent takeout) only on days when there is just one ticket with all six winners.

On other days, it divides 56 percent of the day’s Rainbow 6  bets among tickets with the most winners and puts 24 percent into the carryover.

The carryover has been growing because Sunday, the most recent race day, was the 14th straight day with multiple winning tickets,

*This coming Saturday, June 4, Gulfstream will have its Summit Preview with seven stakes races.

All of those stakes have $75,000 purses and have similar distance and age conditions to richer stakes that are part of Gulfstream’s Summit of Speed card on July 2.

Entries for this Saturday’s races will be out on Wednesday afternoon. 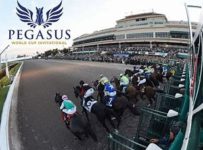