Trainer Mark Casse gained the 1,999th North American victory of his career on Friday, with Son of Oahu in the fourth race at Belmont Park.

Casse has 13 horses entered today, at four tracks, and it would take an incredible day of bad racing luck for  him not to gain his 2,000th win.

Eight of those horses are  entered at Gulfstream Park, where Casse’s assistant trainer Jamie Begg is directing operations.

Casse has three horses entered today at Woodbine in Etobicoke, Ont.  He has single entrants at Churchill Downs in Louisville, Ky., and at Belmont in Elmont, N.Y,

Casse’s first entrant of the day is Reimburse, in the second at Gulfstream with scheduled post of 1:46 p.m.

Reimburse is  the 5-2 morning line favorite in the eight-horse field.

She has one win in six career starts.  In her last race, on April 17 at Gulfstream, she finished third in a $50,000 claiming race at 7 ½ furlongs on turf. Tyler Gaffalione has the return mount.

Today’s field also has Tizjet, who finished a nose ahead of Reimburse on April 17. Edgard Zayas has the return mount for trainer Juan Rodriguez.

Casse has two horses entered in the fifth race, which has today’s most interesting story line at Gulfstream.

One Casse runner is Conquest Pacemaker, owned by his long-time client Conquest Stables.

The other is Jacks or Better Farm’s Best Plan Yet, who will be making his first start for Casse.

Stan Gold, Best Plan Yet’s previous trainer, will send out My Point Exactly.  The  race will be that horse’s first for Gold.

Through early last month Jacks or Better used Gold as its exclusive trainer in Florida, with considerable success especially in 2-YO races. Last month, for reasons not fully disclosed publicly, Jacks or Better owner Fred Brei moved all of his approximately 20 horses to Casse.

Since then Gold has taken on horses from several other owners, including former partners of the recently retired trainer Bill Kaplan. My Point Exactly is owned by a partnership headed by Pinnacle Racing Stables and was previously trained by Kaplan.

Neither My Point Exactly nor Best Plan Yet are in for the tag.

Both are dropping from stakes races and should be among the favorites along with Quiet Force, who is trained by Peter Walder.

Casse is a seven-time winner of the Sovereign Award as Canada’s top trainer.

Assisted by his son Norman Casse and  by Begg, Casse has bases at Woodbine and at Gulfstream and also races regularly at the  major New York tracks and in graded stakes around the United States.

Yourdreamsormine caught the leaders in mid-stretch and went on to beat We’re All Set by three lengths Friday in the $75,000 Bull Gator Stakes at Gulfstream Park.

Grande Shores, the 4-5 favorite, came in third–a neck behind We’re All Set in the seven-furlong dirt stakes for Florida-breds 3-years-old and up.

Following an inquiry and an objection by Edgard Zayas, rider of Grande Shores, stewards determined that We’re All Set interfered with Grande Shores in the turn. They reversed the order of finish of those two horses.

Yourdreamsormine was ridden by Emisael Jaramillo and won in the solid time of 1:22.33 on the track listed as fast.

We’re All set was 9-5 and Yourdreamsormine was 7-2 in the field of only five horses.

The race was the first for Yourdreamsormine for his new trainer Milt Wolfson and for Wolfson’s NTS Stable.

Yourdreamsormine previously was owned by Ione Elkins and trained by Kaplan.

After he retired early last month, Kaplan dispersed horses from his stable to his long-time friend Wolfson and several other trainers.

The win was the fourth in 23 career starts for Yourdreamsormine, a son of Mr. Sekeguchi.

His only  previous stakes victory was last Aug.8 in the seven-furlong Unbridled Stakes at Gulfstream.  That $150,000 stakes was for 3-year-olds as part of the Florida Sire Stakes serie 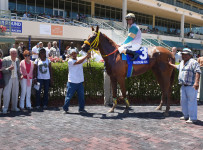