Gulfstream Park is on the verge of setting an all-time record for handle at any of its race meets.

Through Thursday, our review of data from Equibase Co. charts shows that Gulfstream is averaging $9.1 million a day in all-sources handle (total handle). The final three days of the 85-day meet are today, tomorrow and Sunday.

With clear skies in the forecast there is a strong prospect that Gulfstream will break that single-day record on tomorrow’s 14-race Florida Derby day card.

All-sources handle is comprised of these bets made on a track’s races: live on-track; at other thoroughbred tracks and pari-mutuels; at Off-Track Betting locations; via computer and phone Advance Deposit Wagering Services; and at Nevada casinos.

Through Thursday, Gulfstream is averaging 9.2 starters per race. That is the highest average for any North American thoroughbred track this winter, according to Gulfstream officials.

Gulfstream set its all-time record of 9.5 starters per race in the 2014-2015 championship meet.

That number is down slightly this meet primarily because Gulfstream due to inclement weather was forced to move a larger number of scheduled-for-turf races to the dirt.

Through Thursday, Gulfstream has taken 58 races off the turf since the meet began on Dec. 5. Most were in early December and mid January.

The number of races that were taken off turf in the 2014-2015 meet is not readily available.

The above records are for meets held at the multi-purpose racing facility that Gulfstream opened in 2006. Data for the “old Gulfstream” building are not readily available. But it is unlikely that any single-day or meet handle records were set during that pre-ADW era or that field sizes surpassed the past two meets’ very large numbers.

Gulfstream will begin its Spring-Summer Meet this coming Wednesday April 6. 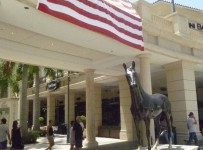