Gulfstream Park has a nine-race card today with first post of 12:55 p.m.

Four races are scheduled for turf and conditions are listed as fast and firm.  There is just a 20 percent chance of rain in the forecast.

The feature eighth race is a $62,500 allowance/optional claimer at six furlongs on dirt for fillies and mares three-years-old and up.  The purse is $44,000 and there are seven entrants.

Trainer Marty Wolfson is sending out Miss Melinda and Curlin’s Princess.  They have different owners and are  separate betting interests.

Miss Melinda likely will be favored, and some bettors will probably single her out in the Rainbow 6.

She is dropping from a series of stakes races that included a second place finish in the 6 ½ furlong Miami Shores Handicap at Gulfstream on Feb. 14. Edgard Zayas has the mount.

Gerardo Corrales will ride Curlin’s Princess, who like Miss Melinda will be racing from off the pace.

The race has the potential of an early speed duel with Fond of Sarah, Pursuing Fate and More Than a Party.

The carryover keeps growing because Wednesday was the 12th straight day of the current cycle without the carryover/jackpot payoff requirement of just one ticket with the winners of all six races.

Trainer Jorge Navarro won with all three of his runners Wednesday, starting with Scotland Bay ($8.80) in the first race before sweeping the late daily double with Delta Bluesman ($3.40) in the seventh and Starship Zorro ($6.20) in the eighth.

The winners were his first three of the six-day-old Spring Meet.  Jane Cibelli, Jason Servis and Mark Casse also have three wins and are in a four-way tie with Navarro in the trainer standings.

Navarro had 46 wins and finished second in the standings during Gulfstream’s 2015-2016 championship meet. Todd Pletcher had 62 victories and won his 13th straight trainers’ title for  that  meet. 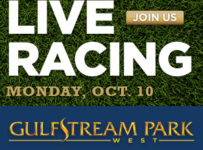