Gulfstream Park has an eight-race program today with first post of 12:55 p.m.

Tampa Bay Downs is dark today, per its usual Thursday schedule.  It will have nine races on Friday with first post of 12:50 p.m.

Conditions are listed as fast and firm today at Gulfstream. According to the Weather Channel there is only a ten percent chance of rain this afternoon in and around Hallandale Beach where Gulfstream is located.

The feature seventh race is a $62,500 allowance/optional claimer at five furlongs on turf for fillies and mares 3-years-old and up.  The purse is $44,000.

Spanish Concert, trained by Kathleen O’Connell, is among likely favorites in the six-horse field. Eduardo Nunez has the mount. We will preview the race on our blog  this afternoon.

O’Connell has 1,799 career wins, and  is her only horse entered at any track today as she attempts to reach 1,800.

She has four horses entered tomorrow, all at Tampa Bay Downs.

Our research, based on data from Equibase Co, and other sources, indicates that O’Connell is second in all-time career wins among  women trainers in North America.

Kim Hammond is first, with 2,084 wins through Wednesday.  She trains mostly in Indiana and other midwestern states.

*Posse Dreamin beat Mascherato by three-quarters of a length on Wednesday in Gulfstream’s feature, at five furlongs on turf for 3-year-olds and up.

Posse Dreamin, at 5-2, won in the fast time of 54.79 seconds on the course listed as firm. Jonathan Gonzales rode for trainer Edwin Broome,

Mascherato, at 9-2, was followed by Doctor J Dub and the 7-5 favorite Do the Roar.

The win was the first in four starts this year for Posse Dreamin, a gelded 4-year-old son of Posse. He finished second twice and third once in races at the same claiming level at Gulfstream.

*Gulfstream has moved its first post time back to 1:15 p.m. for this Friday, Saturday and Sunday. 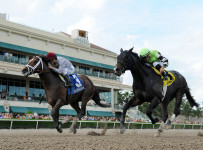