Racing resumes today at Tampa Bay Downs with a ten-race card and first post at 12:25 p.m.

Later this afternoon, the fields will be announced for Saturday’s 36th annual Festival Day, with four stakes races. The Saturday highlight is the $350,000 Tampa Bay Derby (Grade 2) at 1 1/16 miles on dirt for 3-year-olds.

The conditions are fast and firm today, and three races will be on the turf.

Clear skies also are forecast through Saturday, when national focus will be on the Tampa Bay Derby which is a major prep race on the Triple Crown trail.

Basically the winner of the Tampa Bay Derby will earn enough points to assure a spot in the May 7 “Run for the Roses” at Churchill Downs in Louisville, Ky.  The 20 points for second along with at least a few points in another qualifying race should be enough to make the  20-horse field.

Brody’s Cause and Destin head the list of probable Tampa Bay Derby starters.

Brody’s Cause, trained by Dale Romans, won the Kentucky Jockey Club (Grade 1) at 1 1/16 miles at Churchill Downs on Nov. 28.

Two horses that ran in the Tampa Bay Derby – Street Sense who won the Oldsmar showcase in 2007 and 2010 third-place finisher Super Saver – have gone on to win the Kentucky Derby.

Saturday’s other race likely to draw national attention is the $200,000 Hillsborough Stakes (Grade 2) at 1 1/8 miles on turf for fillies and mares 4-years-old and up

Expected to compete is Robert Masterson’s 5-year-old mare Tepin, the winner of the Endeavour Stakes (Grade 3) at Tampa Bay Downs on Feb. 13.

Trained by Mark Casse, Tepin was voted a 2015 Eclipse Award as Champion Grass Female after her scintillating victory in the Breeders’ Cup Mile (Grade 1) against males at Keeneland in Lexington, Ky. on Oct. 31.

All reserved seating and dining areas are sold out. Cooler bags with an embroidered Tampa Bay Downs logo will be given free of charge to the first 7,500 fans, with paid admission. 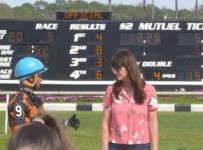