Gulfstream Park on Wednesday announced that it will have 41 stakes races with total purses of $5.575 million during its 2016 Spring-Summer Meet.

That is an increase from 29 stakes with $4.75 million in purses in 2015.  The numbers for stakes and purses are the highest for Gulfstream’s spring-summer racing, which it began in 2013.

The spring-summer meet will be from April 6 through Sept. 30 at Gulfstream’s track in Hallandale Beach.

The stakes will be highlighted by the Summit of Speed card on July 2 and the three legs of the $2.9 million Florida Sire Stakes Series.

“This is another step in our efforts to reinvigorate and rebuild the summer racing schedule in Florida,” said P.J. Campo, Gulfstream’s General Manager and Vice President of Racing for The Stronach Group.

“We continue to see more horsemen applying for year-round stalls and more interest in our stakes schedule,” he said.  We are committed to building our summer schedule. We believe it will make for a stronger overall program in Florida and will showcase large fields and quality racing.”

Gulfstream said that five “big-day” programs with a minimum of six stakes races have been scheduled, including Summit of Speed Day when the three graded events will be supported by six other stakes.

There also will be the three Florida Sire Stakes cards and a card with seven stakes on June 4.

Through 2012 Calder had Florida’s only summer racing.  Amid a dispute over racing dates, the two tracks which are just eight miles apart raced head-to-head on weekends from July 2013 through June 2014.

They settled that dispute in June 2014. Since then, the only racing at Calder has been the October-November meet that Gulfstream is holding under a lease agreement that extends through 2020. 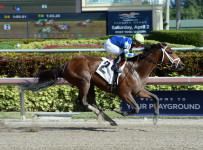