The Florida Horsemen’s Benevolent and Protective Association has announced the election of five members to its board of directors and two alternates for three-year terms, beginning this March 15.

From the owner ranks, Bill White and Tom Cannell were re-elected. Herb Oster was newly elected, as was Joanie Needell, who will serve in the First Alternate capacity. White is the Florida HBPA president for 2015-2016.

To represent trainers, David Fawkes and Phil Combest were re-elected. Carlo Vaccarezza, a former board member, was elected as second alternate.

The Florida HBPA represents the interests of over 6,000 Thoroughbred horse owners and trainers who do business in Florida.

The Florida HBPA board, with the five recently elected members and holdovers, will meet on Thursday March 24 to determine committee chairs and elect a president for the 12 months that begin this April 1.

With 529 ballots tallied out of nearly 6,000 mailed, the results (followed by the number of votes cast for each) are:

Those who ran for the board but did not receive enough votes to secure one of the available positions were Joe Orseno, Ron Spatz, Larry Pilotti, Jenna Antonucci and Roland Crichton.

“We are pleased to welcome our new Board Members in what will be an even more critical year for Florida Thoroughbred racing,” said Florida HBPA elections chairman Marcus Vitali.

“Thank you to everyone for participating in the election,” he added  “One of our accomplishments this year was the creation of an electronic voting system, which we plan to roll out for next year to make voting more convenient.”

Vitali is a board member as a trainer. He supervised the election process with the help of his committee of Daryl Clark, Larry Bates and Steve DiMauro.

FHBPA Officer Kathy Davey was present for the tabulation process, along with Florida HBPA Executive Director Glen Berman and FHBPA Board Member Steve Screnci both of whom are attorneys.

“I’m confident our new members and returning ones will leave the starting gate on their toes for the amount of action we expect after our hard-fought short reprieve from the threat of decoupling,” Vitali said.

He referred to the issue of whether the Florida government should allow pari-mutuels to decouple—i.e. be authorized to stop holding live events while still having poker, in-bound simulcasts and (in counties where permitted) casinos.

The Florida HBPA is an ardent opponent of decoupling. Along with its counterpart associations in the quarter horse and standardbred industries, it maintains that decoupled pari-mutuels would be able to shift some operational dollars from money-losing racing and spend it on operations and promotions for casinos and poker.

Opponents fear that decoupled pari-mutuels would gain an unfair competitive advantage over thoroughbred tracks—leading to possible declines in handle and spillover economic impact on the state’s horse breeding and ownership industries.

This year, the Florida House and Senate considered but did not pass bills that would have allowed decoupling for all Florida pari-mutuels but Gulfstream Park and Tampa Bay Downs.

There was widespread support in both houses for decoupling, largely as what would be a bailout for the struggling greyhound racing industry.

But no gaming bills were passed because of a lack of consensus on a wide range of other gaming issues.

For the Legislature and Gov. Rick Scott a central issue remains setting the terms for a revised gaming compact with the Seminole Tribe.

A compact under which the Seminoles agreed to pay the state about $200 million a year from their gaming revenues expired last July 31. The Seminoles have continued to make those payments to the Florida government.

In its educational and lobbying efforts, the Florida HBPA has emphasized that the economic impact of thoroughbred racing and breeding is long-standing and ongoing—rather than built on promises and speculation.

Along with its allies, it points to studies estimating that Florida’s horse racing industry has 104,000 employees with annual economic impact of $2.2 billion—primarily from breeding and racing of Thoroughbreds.

A central message is that while considering changes that might help some gaming businesses, don’t overlook how those changes could hurt thoroughbred racing and the flow of money it generates in Florida. 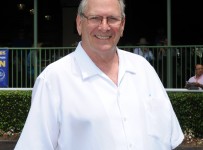