Off the Tracks showed no rust from an eight-month layoff Sunday as she powered to a 4 ¼ length victory over Sugar Cone in the $65,000 Margate Handicap at Gulfstream Park.

With Tyler Gaffalione riding, the 3-year-old filly Off the Tracks (photo on home page) won the 6 ½ furlong dirt stakes in 1:17.29 on the track listed as fast.  It was her third win in three career starts.
Gaffalione substituted on Off the Tracks for Edgard Zayas, one of three jockeys who were tossed from their  mounts during Saturday’s 11th race (details below).

The Margate was Off the Tracks’ first race since July 24 when she won the six-furlong Schuylerville (Grade) at Saratoga. She was sidelined after that win with a knee injury that required surgery.

Roderick Rodriguez trains Off the Tracks for J Stable.

Following Sunday’s victory, Rodriguez said he plans to stretch Off the Tracks out with some big races as targets.

“Our goal is the [Kentucky] Oaks,” Rodriguez said. “God willing, everything is good and she stays sound.”

The 1 1/8 mile Kentucky Oaks (Grade 1) will be run May 6 at Churchill Downs in Louisville, Ky.

Rodriguez said Off the Tracks’ only start prior to that could be the 1 1/16 mile Gulfstream Park Oaks (Grade 2) on April 2.  Off the Tracks does her training at Calder.

The Margate was Off the Tracks’ longest race distance thus far.

She is bred for races around two turns. Her sire Curlin’s list of wins includes the 1 3/16 mile Preakness (Grade 1) and the 1 ¼ mile Breeders’ Cup Classic, both in 2007. Her maternal grandsire Boston Harbor won the 1 1/16 mile Breeders’ Cup Juvenile (Grade 1) in 1996 before being forced to retire due to injuries early the following year.

In the Margate, Off the Tracks was the 9-5 second betting choice in a field of seven.

Off the Tracks sat comfortably behind pacesetter Ballet Diva along the backstretch during a 45.65-second first half mile. The long-striding, powerfully built filly pulled alongside Ballet Diva leaving the turn into the homestretch before rolling to a commanding victory.

“I was very impressed. The pace was so fast that I was afraid it was going to take a toll on her at the end, and Tap to It closes fast,” Rodriguez said. “But, she’s just an incredible filly. The sky’s the limit with her.”

Sugar Cone, at 13-1 and ridden by Julien Leparoux, finished a head in front of 14-1 shot Daddy’s Great Bay.

Tap to It, the 4-5 favorite who hadn’t run since finishing a troubled sixth in the Breeders’ Cup Juvenile Fillies (Grade 1) at Keeneland Oct. 31, finished fifth.

Jockeys Joel Rosario and Rafael Hernandez will both be sidelined for at least a month after suffering injuries in a spill during Gulfstream’s featured 11th race on Saturday.

Rosario suffered a fractured wrist and will be out “four to five weeks,” according to agent Ron Anderson.

“It’s a standard fracture like anyone would get trying to break their fall,” he said. “They’ll put a plate on it Monday to speed things up. We’re very lucky it’s not worse. Joel’s helmet split right in two, so that helmet did its job and probably saved his life.”

“There’s no damage to the spine,” Collier said. “He’ll remain in the hospital for three or four more days just to make sure everything is OK. The ribs are painful. I would say he’ll be out six weeks at least. Probably more.”

Jockey Edgard Zayas, who like Rosario walked off the track and back to the jockey’s room, took off his mounts Sunday with a swollen ankle. He is expected to ride when racing resumes Wednesday.

All three jockeys were unseated from their mounts following collision as the horses entered the stretch in the Melody of Colors, at five furlongs on turf.

Kandoo was euthanized due to injuries sustained in the fall. She was ridden by Rosario.

NOTE–Photo of Off the Tracks by Lauren King, Gulfstream Park 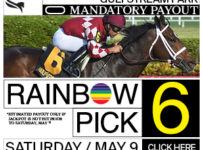