Conditions are fast and firm, and first post is 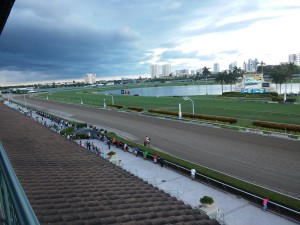 The day’s last five races are scheduled for turf.  There is only a ten percent chance of rain, so it seems certain that those races will stay on the turf.

The carryover is growing because Thursday was the 27th consecutive day on which there were multiple tickets with the winners of all six races in the Rainbow 6.

The Rainbow 6 bet is 20-cents only per combination, with multiple horses in each race and thus multiple combinations.

Our breakdown shows there were 346 winning Rainbow 6 tickets on Thursday.  Each received $572.86.  That was not a life-changer. But it is under the $600 minimum for going to the IRS window.

Gulfstream pays out the full Rainbow 6 pool of the day’s bets (minus the 20 percent takeout) plus the carryover only on days when there is just one ticket with all six winners.

On other days Gulfstream divides 70 percent of the day’s bets (minus the takeout) among those bettors holding tickets with the most winners, while 30 percent (minus takeout) is added to the carryover.