On Saturday, Mshawish won the $500,000 Donn Handicap (Grade 1) and did it in a way that should remove any doubt that he has become the horse for the course at Gulfstream Park.

That is for dirt, where he now has won both his Gulfstream starts, and also turf, where he is three-for-three at the Hallandale Beach oval.  All of those victories were in stakes races.

Now, trainer Todd Pletcher expects that the 6-year-old Mshawish  (photo on home page) will next race in a rich stakes, dirt or  turf to be determined, on March 26 in the United Arab Emirate of Dubai.

The win in the Donn was probably Mshawish’s most impressive, considering the prestige of the race and the quality of the eight-horse field.

Mshawish took the lead coming off the final turn and went on to beat Valid by two lengths in the 1 1/8 mile dirt race.

Mshawish was ridden by John Velazquez and won in 1:47.89 on the track listed as fast. That was the fourth fastest time in the eight runnings of the Donn on the 1 1/8 mile track that Gulfstream installed in 2005.

“I loved the way he finished up at a mile and an eighth,” Pletcher said. “That was kind of the one thing we were looking to prove that he could stay a mile and an eighth on the dirt. I actually thought he ran the best race of his career. He got a great trip. Johnny gave him a great ride and he delivered a big performance.”

Mshawish made his Gulfstream dirt debut on Jan. 9 in the one mile Hal’s Hope (Grade 3). He caught Valid in the final strides and won by a neck. Both are sons of Medaglia d’Oro, the winner of the 2004 Donn Handicap.

Mexikoma finished third in Saturday’s race. He came into it off a win in the 1 1/8 mile  Sunshine Millions Classic for Florida-breds on Jan. 16.

Keen Ice, the 2-1 favorite in the Donn, finished sixth.

Despite his previous Gulfstream success, Mshawish was the 4-1 third betting choice.

Mshawish is owned by Al Shaqab Racing, whose principals are based in the United Arb Emirate of  Qatar.

Following Saturday’s victory, Pletcher reiterated that Mshawish’s next race probably will be on March. 26 on the World Cup card at Meydan Race Course in Dubai.

On Saturday, Lukes Alley won the Gulfstream Park Turf by a  neck  over Shining Copper, with a time of 1:48.20  over a course listed as firm.

Lukes Alley (adjacent photo) was ridden by Paco Lopez and is trained by Josie Carroll.

Tommy Macho won in the fast time of 1:33.53.  He is trained by Pletcher and was ridden by Luis Saez.

*Lady Shipman won the Ladies Turf Sprint by 2 ¾ lengths over Katie’s Kiss.  She won in 58.14 seconds, Jewel of a Cat finished third, by another length.

Power Alert ran five furlongs in 57.74 seconds under Julien Leparoux.  He is trained by Brian Lynch. 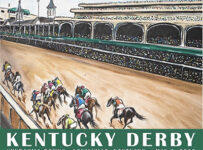