Hall of Fame and classic-winning trainers Claude “Shug” McGaughey and Bill Mott will be represented at Tampa Bay Downs on a 10-race Wednesday card with first post of 12:30 p.m.

McGaughey, the 1988 Eclipse Award winner as Outstanding Trainer and winner of the 2013 Kentucky Derby  with Orb and the 1989 Kentucky Derby with Easy Goer, will have starters in two of Wednesday’s races.

He has had them vanned cross-state to Tampa Bay Downs, in Oldsmar, from his winter base at Gulfstream Park in Hallandale Beach.

He will have My Impression in the sixth race and Red Guard in the eighth race.

Mott has sent one horse, Il Mulino, to run in the seventh race. Mott’s winter base is at Payson Park in Indiantown.

Jose Lezcano will ride the two McGaughey horses and Il Mulino.  As usual, Lezcano and the two trainers are competing this winter primarily at Gulfstream which is dark today.

The 3-year-old filly My Impression, winner of a maiden special weight race at Aqueduct on Nov. 27 in her most recent start, is the 5-2 morning-line favorite for the sixth race—with scheduled post of 3:00 p.m.  It is an allowance/optional claiming event at a mile-and-a-sixteenth on the turf for 2-year-old fillies.

The 4-year-old colt Red Guard is the 2-1 morning line for the eighth race, a one-mile turf conditional allowance for horses 4-years-old-and-upward.

The seventh race is a seven-furlong allowance/optional claiming event on the main dirt track for fillies and mares 4-and-upward.  The claiming price is $32,000 and Il Miluno is not in for a tag.

Il Mulino won a seven-furlong allowance/optional claiming race at Tampa Bay Downs on Dec. 26. But it came against lighter company in a  $16,000 claimer.

Her expected rivals include the 4-year-old filly and 5-2 morning-line favorite R Sassy Lass, from the barn of trainer Gerald Bennett.

She won both the Sandpiper Stakes and the Stonehedge Farm South Sophomore Fillies Stakes at Tampa Bay Downs last season and finished second in between those efforts in the Old Hat Stakes (Grade 3) at Gulfstream.

Antonio Gallardo will ride R Sassy Lass. He leads Tampa Bay jockeys with 54 wins  during the first 27 days of  the meet.

Mott trained the legendary two-time Horse of the Year Cigar, as well as 2010 Belmont Stakes and 2011 Breeders’ Cup Classic winner Drosselmeyer. He has won the Eclipse Award as Outstanding Trainer three times. 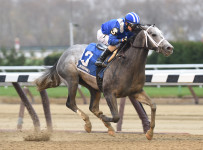 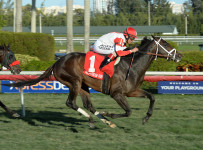