Gulfstream Park will have eleven races today with a first post of 12:35 p.m.

Gulfstream is usually dark on Mondays.  It has a special race card today, the Martin Luther King Day holiday

Tampa Bay Downs’ next race day will be Wednesday when it will have ten races  with first post of 12:25 p.m.

On Saturday, Mexikoma and X Y Jet were the biggest stars in the annual Sunshine Millions at Gulfstream.

The Classic and the Sprint were among the six Sunshine Millions stakes races—all restricted to Florida breds for 4-year-olds and up.

Those races were run one day after Gulfstream, due to rains prior and during the race card, moved all five races scheduled for turf to the dirt track that was listed as sloppy.

No rain fell on Friday night and Saturday morning. That allowed drying out for Saturday, which was a rain free afternoon.

The main track started out listed as good, but was upgraded to fast prior to the start of stakes races, The turf course was listed as good although it was (expectedly) wet in spots.

Times were relatively fast on dirt, but on turf they were understandably slow for stakes races.

Gulfstream does not regularly report the breakdowns among live and off-site handle.

We will have follow-up reports this week on several of the Sunshine Millions races.

Here are details of the six races.

Emisael Jaramillo rode X Y Jet in the Mr. Prospector and in the Sunshine Millions Sprint.

Mom’z Laugh and You Bought Her raced head-to-head over the  final 200 yards, with Mom’s Laugh winning by a nose. Legal Laura finished third,

Manchurian High was the 7-1 third betting choice and  Reporting Star was the second choice at 4-1 in the 11-horse field.  Fundamental, the even money favorite, finished third

Lori’s Store beat her stablemate E.B. Ryder by a half-length.

The two horses raced as separate betting interests. Both are trained by Marty Wolfson and owned by Miller Racing.

Lori’s Store was the even-money favorite in the six-horse field. She was ridden by Velazquez and won in 1:45.83.

Amelia’s Wild Ride defeated Summation Time by a half length. 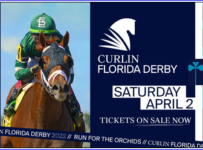