All of the races are claiming, including three on turf.

The Sunday card will follow a Saturday on which Gulfstream had five stakes races for newly turned 3-year-olds.

Also on Saturday, Joel Rosario rode the winners of five of the eleven races. Two of his wins were in stakes.

* Awesome Speed (photo on home page) won the Mucho Macho Man at one mile on dirt for males.

* Awesome Banner won the Hutcheson (Grade 3) at six furlongs on dirt for males.

* Lira won the Ginger Brew at 7 ½ furlongs on turf for fillies.

Prior to Saturday, he had two wins from 31 starts through the first 18 days of the championship.

A native of the Dominican Republic who also had a five-win day in September at Belmont Park, Rosario ended the day by sweeping the late daily double. He won the $100,000 Mucho Macho Man aboard favored Awesome Speed ($3.20) and rallied up the rail to score with Bar None ($7.60) in the finale.

“My agent told me we had a good chance today, but I can’t believe we were going to win five,” Rosario said. “I’m really happy and we’ll just go forward from this. It’s a great way to start the new year. It helps to motivate me to keep working hard and go from there.”

Rosario rode 35 winners in Gulfstream’s 2014-2015 meet, placing him seventh in the standings. 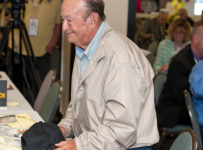