Daring Bride overcame a change of surface and her own greenness to capture her career debut Sunday and continue trainer Todd Pletcher’s hot start to the 2015-2016 Gulfstream Park championship meet.

After three days of the meet Pletcher leads trainers with three wins, one more than Peter Walder. On Saturday, Walder won Claiming Crown stakes races with Runs With Bulls and Moonshine Promise. Pletcher’s three victories have been by 2-year-olds.

Ridden by Hall of Famer John Velazquez, the 2-year old filly Daring Bride (photo on home page) rated at the back of a tight bunch in the early going before taking command on the outside rounding the far turn and drawing away down the stretch. She beat Determined Lady by 6 ¾ lengths.

The daughter of Scat Daddy went off as the 3-5 favorite in a field of five. Six horses were scratched from the race because of the surface switch.

“We felt like she was a filly that wanted two turns, so that’s why we went to the grass first time out,” Pletcher told the Gulfstream media office.

“ A lot of the Scat Daddys are taking to the grass,” he said. “We figured she’d been training well so we’d go ahead and give it a try off the turf and she handled almost everything well.”

Pletcher added: “She got a little green down the lane, which made me nervous for a moment there and sure made Johnny a lot nervous. (it was like) She said, ‘I thought we were supposed to be on the grass.’”

The Kentucky-bred Daring Bride was bred and is owned by Red Oak Stable. John Brunetti, the chairman and owner of Hialeah Park, owns Red Oak.

Pletcher was the trainer of Scat Daddy, the 2007 winner of the Fountain of Youth (Grade 2) and Florida Derby (Grade 1) at Gulfstream.

Bidding for a 13th consecutive championship meet training title, Pletcher has won with three of his first four starters– all of them 2-year-olds. Stradivari and Zulu took the first two races on Saturday’s opening day. They were the only two Saturday races that were not Claiming Crown races.

Stradivari, a son of multiple Grade 1 winner Medaglia d’Oro out of Grade 2-winning mare Bending Strings, rolled by 11 ¼ lengths in his second start and first going a route of ground.

Zulu, a $900,000 purchase and a son of 2006 Preakness winner Bernardini, was a two-length winner in his debut at six furlongs.

Velazquez was aboard both horses, each of which Pletcher said would likely have their next start in an allowance race. 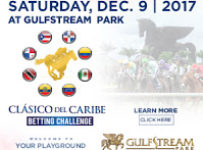