Unless we missed one, there is not a single thoroughbred track in the United States or Canada, that had racing yesterday, Christmas Eve, or that has racing today, Christmas Day.

Gulfstream Park in Hallandale Beach and Tampa Bay Downs in Oldsmar are among the North American tracks not running Christmas Eve and Christmas Day.

On the other hand our phone calls and Internet research show that “yes, we’re open” Christmas Eve and Christmas Day is the word at all of the 15 casinos in Florida, including Gulfstream.

It is undoubtedly the same at most casinos that have been proliferating at race tracks and on Tribal lands in numerous other states.

In Florida seven casinos are run by the Seminole Tribe, one is run by the Miccosukee Tribe and seven are at pari-mutuel facilities in Miami-Dade and Broward counties.

Christmas Schedules
Gulfstream usually runs on Thursday and Friday, but not so during this week of religious importance to most Floridians. Tampa Bay Downs is dark on Thursdays, but runs on Fridays other than this week.

Tampa Bay Downs does not have a casino. Its poker room was open Christmas Eve, but not Christmas Day. At the Seminole Hard Rock off I-4 in Tampa it is business as usual both days–for Las Vegas-style slots, poker and blackjack.

Gulfstream’s casino rooms and poker room are open both days. It’s the same with the six other pari-mutuel casinos and the four Tribal casinos in Miami-Dade and Broward.

Hialeah Park has not had thoroughbred racing since 2001. It will open its seventh straight quarter horse meet this Saturday.

Hialeah’s normal schedule for ten weeks will be Fridays through Mondays. But it pushed its opener back a day to keep from running on Christmas.

The casinos at Hialeah and at Calder Casino & Race Course (photo on home page) were both open their regular Christmas Eve and Christmas day hours.

Calder Situation
The only racing at Calder is now for 40 days each October and November as the Gulfstream Park West meet that is run by Gulfstream under a lease agreement that extends through 2020.

Churchill Downs Inc., Calder’s parent, agreed to that lease to meet state regulatory requirements for keeping the casino at Calder.

Meanwhile, Calder is prominent among pari-mutuels that would like to decouple their casinos from live racing–if the Florida Legislature allows that change in operations.

If decoupling is approved Florida horse tracks, greyhound tracks and jai-alai frontons would no longer be required to hold the live racing and games for which they were originally licensed. But they could keep their poker rooms, in-bound simulcasts (including thoroughbreds) and casinos where permitted.

If decoupling is approved there are expectations that Calder might attempt a full exit from racing by finding a way to break its racing lease with Gulfstream.

Gulfstream has racing from December through September and uses October and November to refurbish its turf course and for general sprucing up round its facility.

Decoupling looms as a central issue for the Legislature in its regular session from Jan. 12 to March 11.

The starting point for the 2016 gaming debate is the revised Seminole Compact that Gov. Rick Scott sent to the Legislature early this month.

In its current form, the Compact would not be voided if decoupling is permitted for Florida pari-mutuels.

Concerns of Horsemen
The widespread view among Florida thoroughbred breeders, owners and trainers is that decoupled pari-mutuels would be able to take marketing resources away from their current money-losing racing and spend it promoting their casinos.

The horsemen are concerned that the result would be a shift of some gaming dollars from wagering at Gulfstream and Tampa Bay to slots and poker at decoupled casinos–thus leading to problems that could include lower race purses and fewer races.

The Florida Horsemen’s Benevolent and Protective Association is the most adamant opponent of decoupling. The Florida HBPA’s members are trainers and owners who race their horses at Gulfstream and at the Gulfstream Park West meet.

For ongoing reports on decoupling issues, we suggest that you visit the Florida HBPA-sponsored Web site www.nodecoupling.com.

Starting early next week we will have ongoing and regular coverage of the legislative debate on decoupling, the Seminole Compact and other issues related to thoroughbred racing.

Who’s Open?
It should be noted that many Florida casinos also are destinations for dining and entertainment. But there’s no escaping that their reason for being is slot machines–even on Christmas day.

And don’t forget that if you are driving to a Florida casino today, you can stop and buy Florida Lottery tickets at almost any open convenience store.

“Who’s open on Christmas?” is tied to decades of tradition, or a lack thereof.

The thoroughbred tracks extend back decades to an era when closing for Christmas was an established practice for U.S. businesses. It also was a period when profits could be made in the now struggling greyhound racing industry, which is leading the fight for decoupling of live events from other gaming. 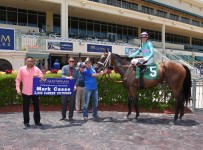 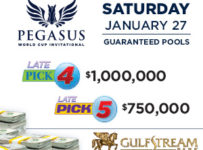