Both Florida thoroughbred tracks will have three stakes races this Saturday.

Gulfstream’s stakes lineup is highlighted by the Mr. Prospector (Grade 3) at six furlongs on dirt for 3-year-olds and up.

On Saturday morning, we will have previews of both tracks’ stakes races.

The Hallandale Beach track will have ten races on Friday with first post of 12:35 p.m.

Five of the eight races are scheduled for turf. They are the first five races. That schedule should enable Gulfstream to get those races on turf before the chance of rain rises to 50 percent late in the afternoon in the Miami-Fort Lauderdale area.

The portable rail is at 96 feet for the first, third and fifth races and at 36 feet for the second and fourth races. The ninth and feature race is a $75,000 allowance/optional claimer at one mile on dirt for 2-year-olds. The race is a $41,000 purse.

Destin, trained by Todd Pletcher, is the 2-1 morning line favorite. Destin is making his second career start, following a win at one mile on dirt at Belmont Park on Oct. 18. Javier Castellano has the mount.

Sumpter and Brighton Lane have good shots to hit the board, and are win threats if Destin falters.

Sumpter is coming off a third place finish in the one mile Smooth Air Stakes at the Gulfstream Park West meet (Calder) on Nov. 28. Eddie Castro will ride for trainer Larry Bates.

Brighton Lane, trained by Stan Gold, won his first start–at Gulfstream on May 9. He has finished no better than third in five subsequent races, all in stakes at Gulfstream and Calder. He could benefit from a drop to allowance company. Jeffrey Sanchez has the mount.

Tampa Bay Downs
The Oldsmar track will have ten races on Friday with first post of 12:28 p.m.

* Lightning City — 5 furlongs on turf, fillies and mares 3-years-old and up; ninth race with scheduled post of 4:26 p.m. 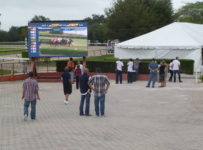