Jewel of a Cat prevailed in a four-horse stretch duel and beat Tesalina by a neck in Sunday’s $75,000 Windley Key Stakes at Gulfstream Park.

Catching Fireflies finished another neck behind in third place, with Aquinnah coming in another half-length back in fourth.

Jewel of a Cat, the 7-5 favorite, was ridden by Paco Lopez and won in 55.34 seconds in the 5-furlong turf race for fillies and mares 3-years-old and up.

It was Jewel of a Cat’s second straight stakes victory since joining the stable of trainer Carlo Vaccarezza.
On Nov. 7, the 5-year-old mare won in a field that included males in the $100,000 Millions Turf Sprint Preview during the Gulfstream Park West meet at Calder (photo on home page).

On Sunday, Jewel of a Cat became involved in a three-horse battle for the lead with Silver Sashay and Aquinnah along the backstretch and around the far turn.

After Silver Sashay dropped out of contention on the turn into the homestretch, Jewel a Cat battled with Aquinnah through the stretch before edging away and holding off a late inside surge by Tesalina.

“She’s always game,” Vaccarezza said. “She’s a fighter. They put a lot of pressure on her today. That’s what shows what she’s made of.”

Late this summer, John Williams (a partner in Vaccarezza’s restaurant business) bought out his partner in Jewel of a Cat. Williams then transferred the Florida-bred mare to Vaccarezza from Ben Perkins, who had saddled her for a victory in the Ladies Turf Sprint at Gulfstream Park last February.

After pondering the possibility of breeding his mare to Empire Maker, the 2013 Florida Derby winner, Williams decided to keep her in training. 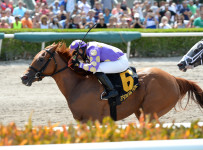