XY Jet came within two-fifths of a second of Calder’s six-furlong track record on Wednesday as he romped to a 4 ½-length victory over Weekend Hideaway at the Gulfstream Park West meet.

XY Jet, a 3-year-old gelding owned by Gelfenstein Farm, won the featured eighth race in 1:09.33 over the Calder dirt track that was

Through Nov. 28, Gulfstream Park is holding the GP West meet at Calder under a lease agreement with that track.

XY Jet’s win was an example of the meet’s strong showings by horses with connections to Venezuela and/or New Jersey.

Gelfenstein Farm is a thoroughbred training and rehabilitation center in Ocala. It was founded in 2013 by its CEO Ivan Rodriguez Gelfenstein, a native of Venezuela.

XY Jet is trained by Jorge Navarro, a native of Panama, who leads GP West trainers in victories and led trainers in wins at this year’s meet at Monmouth Park in Oceanport, N.J.

Wednesday’s Race
On Wednesday, XY Jet was the 7-2 second choice and Weekend Hideaway was the 2-1 favorite in a $62,500 optional claiming race with a $40,000 purse. Neither XY Jet nor Weekend Hideaway were in for a tag.

XY Jet won gate to wire, reeling off fractions of 21.61, 44.32 and 56.51. He was ridden by Emisael Jaramillo, who this year is riding in Florida after several seasons as one of the top jockeys in Venezuela.

One More Night Came in third, three-quarters of a length behind Weekend Hideaway. Roger Rocket was another head back, in fourth.

A review of Calder media guides indicates that XY Jet’s time probably was among the five or so fastest for six furlongs at the track that opened in 1971. XY Jet would have come closer to Forty One Carats’ record if Jaramillo had been required to pressure him near the finish.

The .38 of a second difference between the times of Forty One Carats and XY Jet equates to about two lengths.

Later today or on Friday, we expect to have a speed rating from Brisnet or another service on XY Jet’s time.

In any case XY Jet’s time was exceptional, considering that Calder’s deep track is less conducive to fast race times than most of the country’s other major tracks. Calder’s track is widely regarded as one of the country’s safest for training.

Under the lease agreement, Gulfstream is responsible for maintenance of Calder’s dirt track and turf course. That work is supervised by Bill Badgett, a consultant to Gulfstream and its parent company The Stronach Group.

The win on Wednesday was XY Jet’s third in 11 career starts. He also has three second place finishes, including this year’s Hutcheson Stakes (Grade 3) for 3-year-olds at Gufstream.

In his race prior to Wednesday, XY Jet won a six-furlong optional claimer at Monmouth Park on Sept. 20.

Joe Bravo rode Weekend Hideaway on Wednesday. He and Serpe are both regulars at Monmouth each summer and at Gulfstream each winter.

This past Jan. 17, Weekend Hideaway won the Sunshine Millions Sprint at Gulfstream.

There is a strong prospect that XY Jet and Weekend Hideaway will be in the Mr. Prospector Stakes at Gulfstream on Dec.26. That race has a $100,000 purse and is six furlongs on dirt. 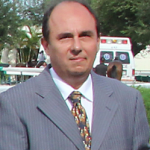 Sano, a native of Venezuela, trained XY Jet n his first six races before Gelfenstein transferred him to Navarro.

Jaramillo is in fourth place in the jockey standings He trails Edgard Zayas (30 wins), Tyler Gallafione (22) and Eddie Castro (20).