HorseracingFLA.com business manager Barry Unterbrink and I will be guests from 3:45 p.m. to 4:30 p.m. Eastern Time this afternoon on It’s Post Time on WDBFradio.com http://wdbfradio.com/

WDBF is an Internet station that has extensive
coverage of Thoroughbred racing and a worldwide audience.

This afternoon, we will join JJ and Samm in talking about this weekend’s Breeders’ Cup races and about the Gulfstream Park West race meet that Gulfstream Park is holding at Calder.

JJ is a former trainer who had more than 1,000 career wins. He is the all-time leading trainer in wins at Atlantic City Race Course, where his accomplishments included being leading trainer and leading owner five years in a row. Those records will not be broken because that track was closed permanently in January, 2015.

JJ is an adviser to many of his friends in racing. Samm is a long-time thoroughbred breeder and owner.

JJ and Samm are on site at Gulfstream on broadcast days when that track has live racing. On other days, they do It’s Post Time at the WDBF studios in Fort Lauderdale.

They also are the hosts of JJ and Samm in the Morning, weekdays from 7:00 a.m. to 9:00 a.m.
The show has news and discussions on a variety of topics, including thoroughbred racing.

Starting Nov. 11, Barry and I are scheduled to be on It’s Post Time each Wednesday from 4:00 p.m. to 4:30 p.m. Eastern. During many of these segments, JJ and I will interview leading trainers, jockeys and other newsmakers in Florida horse racing.

JJ will write occasional guest columns for HorseracingFLA.com, and he will be a source of information for our news coverage. In addition, WDBF will be a partner with HorseracingFLA in other projects. 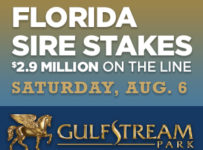