HorseracingFLA Staff Report
Early arrivals began flooding the backside at Tampa Bay Downs on Monday morning as the stable area opened at 8 a.m. in preparation for the thoroughbred track’s 2015-2016 meeting.

Tampa Bay Downs, in Oldsmar, will resume live racing on Saturday Nov. 28. It will have racing at least three days each week through May 8.

Tampa Bay Downs will begin with racing on Wednesdays, Fridays and Saturdays. It will add Sundays on Dec. 20.

On Monday, sunny skies and temperatures in the 80s greeted horses and their handlers who had no difficulty acclimating to their new surroundings.

“This is my kind of weather,” Kingsley Beckford, an assistant to trainer Jason DaCosta, told the Tampa Bay Downs press office.

Beckford accompanied 12 horses trained by DaCosta on their 19 ½-hour van ride from ThistleDown Racino in the Cleveland suburb of North Randall. Ohio.

“It’s a good environment all-around here,” Beckford said. “The barn area is clean, the track surfaces are good and the horses enjoy being here.”

The Tampa Bay Downs main track will open for training at 6 a.m. on Monday, Nov. 9.

Creech Horse Transportation drivers Mike LoPiano and Tom Kauffman timed it to arrive with DaCosta’s horses at 8 a.m. sharp, and under normal circumstances, they would have been the first on the grounds.

But when a truck hauling the unraced 2-year-old filly Miss Adara reached the stable gate shortly after 7 a.m. from Innfields Training Center in nearby Odessa, allowances were made to permit her to report early to her new home in Barn 21, where she will be trained by Charles Harvatt. 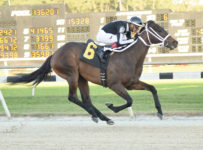 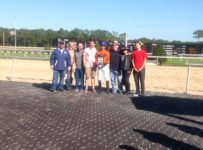