HorseracingFLA Staff Report
Silent Prayer had a solid summer and early fall at Gulfstream Park, as she hit the board four times in a row in stakes races.

The 2-year-old filly, trained by Stan Gold and owned by Fred Brei’s Jacks or Better Farm, will get some class relief this afternoon at the Gulfstream Park West meet. Silent Prayer heads a seven-horse field in the featured ninth race–a $75,000 optional claimer at one mile on dirt with a $39,000 purse. She is not entered for a tag.

Gulfstream is holding the GP West meet at Calder as part of a lease agreement.

GP West will have ten races with first post at 1:15 p.m. The main track is listed as fast and the turf course is listed as good.

Silent Prayer won her debut on May 6 at Calder. Since then, s

Regular rider Jesus Rios has the mount on Silent Prayer.

The speedy Chief Attraction looms as the top threat to Silent Prayer. She broke her maiden at one mile on a sloppy track at Gulfstream on Sept. 18.

* Starship Zorro (8-1) rallied from sixth and last place after a half mile and beat Padilla (6-5) by one length in Wednesday’s feature–a $35,000 optional claimer at one mile on turf for 3-year-olds and up.

Luca Panici rode Starship Zorro and won in 1:36.74 on the course listed as firm. The race had a $28,000 purse. Ralph Kassen trains the 50-year-old horse Starship Zorro for owner Peter Miller.

Xaverian (15-1) finished third, two lengths behind Padilla, in the six-horse field. Joes Blazing Aaron, the 6-5 favorite, led through the first three quarters of a mile but faded and finished last 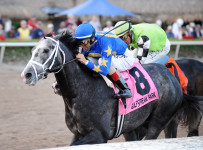