Monday, Oct. 12 — At least for one day, the loss of a five-pound weight allowance didn’t slow down Tyler Gaffalione or his horses.

Gaffalione rode four winners at the Gulfstream Park West meet on Sunday, his first day without apprentice status and a five-pound bug in non-stakes races. He rode in nine races, and also had a second place finish and a third place finish.

The victories gave him a total of ten after five days of the GP West meet that Gulfstream Park is holding at Calder. Eddie Castro, Edgard Zayas and Jonathan Gonzales are tied for second place with four wins each.

Gaffalione, a 21-year-old native of South Florida, has six mounts at GP West today. First post is 1:15 p.m. for the ten-race card.

Gaffalione captured the spring and summer meetings at Gulfstream Park as an apprentice,

“It’s kind of just a big relief. I wasn’t too nervous, but I had a goal to come in today and just ride like it was another day,”
Gaffalione said.

He added: “Everything’s been running great, I’ve been riding for great people that have done a great job with their horses. I can’t thank everyone enough for making it possible.”

A review of Equibase charts shows that through five days this year’s GP West meet is averaging about $3.3 million a day in all-sources handle and 8.9 in field size.

Last year was the inaugural GP West meet at Calder. Through five days of that race meet, the averages were $2.5 million in handle and 9.9 in field sizes.

The current GP West meet has exceeded last year in handle on all five days and in field sizes on two days (Saturday and Sunday).

The higher handle can be attributed partly to the fact that it has become clearer to simulcast bettors that Gulfstream, with its better brand recognition 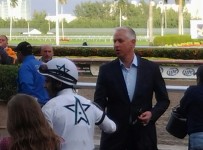