By Jim Freer
There was no stopping the 2-year-old colt Aggressive Driver at the Gulfstream Park West meet on Saturday, as he went gate-to-wire and broke his maiden with a fast time for seven furlongs

Aggressive Driver beat Blind Ruckus by three lengths in the $60,000 maiden special weight race. He was ridden by Esmail Jaramillo and won in 1:24.76–an impressive seven-furlong time for a 2-year-old on the deep dirt track at Calder Casino & Race Course.

For the second straight October-November, Gulfstream Park is holding the GP West meet at Calder under a lease agreement.

Aggressive Driver was the 3-5 favorite in a 10-horse field. It was his second career start. On Sept. 26 at Gulfstream, he finished second to by a neck at 6 ½ furlongs.

Oscar Gonzalez trains Aggressive Driver for owner Wilfredo Agusti. The colt is a Florida-bred son of First Dude. Agusti bought him for $50,000 at the Ocala Breeders Sales Co.’s April 2015 sale.

* Luca Panici rode three winners on Saturday, giving him five after the first ten days of the GP West meet. He is in sixth place in the standings. 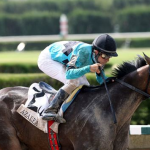 Edgard Zayas rode one winner on Saturday. That gives him 11 victories for the GP West meet and keeps him second in the standings behind Tyler Gaffalione who has 14.

Gaffalione was at Laurel Park in Laurel, Md., on Saturday for two mounts on the Maryland Million card.

Gaffalione traveled to ride Can’t Explain, trained by Ralph Nicks who uses him as his go-to rider at Gulfstream and at GP West. Jonathan Sheppard trains Fort Collins.

Admirals War Chest held off a late run by Bullheaded Boy to win the Classic at 1 1/8 miles on dirt.

On Sunday at GP West, Gaffalione has six mounts and Zayas has seven mounts.

* A disqualification of 4-1 Dee’s Causeway in Saturday’s seventh race made 35-1 shot Cruising the winner and produced a payoff of $15,017.45 for a 50 cent bet in the late Pick 5. There was one winning ticket.

Dee’s Causeway finished first by 1 ¼ lengths over Cruising. But the stewards reversed that order after they determined there was interference by Dee’s Causeway near the finish line.

There were no tickets with all six winners in the 20-cent only Rainbow 6. Each ticket with five winners received a payout of $563.30.

* GP West’s all-sources handle on Saturday was $3,800,629. That is the total betting on GP West races done at Calder, at other tracks and simulcast sites (including Gulfstream) and via Internet and phone betting services.

On Saturday, Gulfstream had 80 starters in ten races.

Conditions were fast and firm all three days. 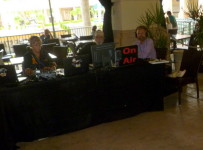