By Jim Freer
Tuesday, Oct. 13, 2015–Churchill Downs Inc. (CDI) is seeking to sell up to 60 acres of the land that it has designated for a non-racing commercial redevelopment at Calder Casino & Race Course in Miami Gardens.

But officials of Calder and its Louisville, Ky.-based parent company would not identify any potential buyers or the type of projects they are considering for Calder. CDI and Calder also are not commenting on redevelopment plans that would not involve a sale.

“Other than the parcel is for sale I do not have any comments for you,” Calder president Maureen Adams said in an e-mail on Friday.

Calder’s marketing of the land includes two “For Sale” signs, one saying 60 acres, that it recently put outside fences on its 250-acre property.

The signs have phone numbers for the Miami office of commercial real estate brokerage Savills Studley. Roy Abernathy, a senior managing director in that office, said he is referring callers to Adams.

Sources familiar with Calder said the land on the sales block is on the east side of the property, fronting Florida’s Turnpike. That includes the part of the backside where Calder in April 2015 tore down barns with 1,400 stalls.

Calder reportedly has been considering a transportation logistics hub/truck stop, an industrial park or a hotel for that portion of its property.

In interviews late last year and early this year John Marshall, then Calder’s general manager, would not identify potential projects but said Calder and CDI were seeking development partners.

Since July, Marshall has been assistant general manager at Miami Valley Gaming in Lebanon, Ohio. Miami Valley, a harness track/casino, is a joint venture of CDI and Buffalo, N.Y.- based Delaware North Cos. Delaware North manages food services and hospitality at several dozen U.S. stadiums, arenas and racetracks.

Some observers maintain that a truck stop or industrial park would be the most feasible use of the available land because of Calder’s access to Florida’s Turnpike. But the only direct entrance, regarded by some as treacherous, is on County Line
Road that runs east-west.

Calder’s entrances on its west side (N.W. 27th Avenue) are about a mile north of Sun Life Stadium–home of the Miami Dolphins, the University of Miami football team and numerous soccer games and entertainment events. The stadium also is a potential site for future Super Bowls. And through 2020, live racing is scheduled at Calder for two months each year.

All of that would make a Calder hotel attractive at certain times to sports-oriented visitors to South Florida. But Calder is ten miles inland, and not in close proximity to the region’s central business districts. In addition, Miami Gardens has one of the highest crime rates among South Florida municipalities.

Calder’s entire property is zoned as agricultural (to which its casino is related). To redevelop land on the backside, Calder would need to receive a zoning change from the city of Miami Gardens. Information on whether Calder has applied for any changes was not readily available.

The land up for sale does not include Calder’s casino, its seven-story grandstand/racing building and administrative offices.

As first reported by HorseracingFLA, CDI announced on July 29 that this December it will begin tearing down the seven/story grandstand/clubhouse racing building that is adjacent to the track and a short walk from the casino building.

The racing building has been closed to the public since last December. Basically. Calder over several years has reduced its racing season from eight months to two months and no longer has prime use for the aging building.

CDI and Calder will carry out an old-style demolition that likely will take at least several weeks. The building reportedly has asbestos and other contaminants and cannot be imploded.

For the second consecutive October-November, Gulfstream is holding a race meet at Calder using the name Gulfstream Park West.

Calder leased its racing operations to Gulfstream in July 2014 as part of a settlement of a bitter racing dates dispute. The two tracks, just eight miles apart, raced head-to-head on weekends, from July 2013 until June 2014.

CDI continues to own all of Calder, including the track, and continues to operate the casino that opened in 2010. The casino has 1,200 slot machines. It is a centerpiece of CDI’s (Nasdaq: CHDN) business strategy where it expects that growth in revenues and profits will come mainly from its casino segment and other non-racing segments.

Shortly after signing the July 2014 “truce agreement” with Gulfstream and its parent The Stronach Group, CDI began confirming reports that it is planning a commercial redevelopment for portions of the backside that it did not lease to Gulfstream. But it has not released details of any types of projects that are under consideration. 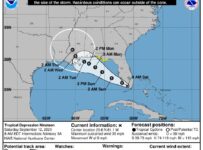 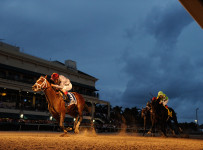