That was the second lowest for the meet in its first seven days. But that wagering came on a Wednesday that did not have any special attractions, and it was higher than the GP West handle of $2,400,704 on this year’s opening day Wednesday Oct. 7.

For the second straight October and November, Gulfstream Park under a lease is holding the meet it calls GP West at neighboring Calder Casino & Race Course.

In a story posted yesterday, we reported that the GP West meet through Monday, its sixth day, had daily average all-sources handle of $3.15 million. That is an increase of 22 percent over the average of $2.59 million for the 2014 meet’s first six days – from Wednesday Oct. 8 to Monday Oct. 13.

Those numbers and other data for this story are based on Equibase charts.

GP West began its second race week on a Thursday last year. So there is not a direct comparison for yesterday’s handle or for its relatively low field size of 7.5 starters per race.

Gulfstream, through 2020, is holding an annual eight-week race meet at Calder as part of a July, 2014 agreement that settled a racing dates dispute.

But there is lingering animosity pitting Gulfstream and its parent The Stronach Group of Aurora, Ontario, against Calder and its parent Churchill Downs Inc., (CDI) of Louisville, Ky.  So, many in the racing industry are closely monitoring the GP West meet with hopes that there will be no disputes.

The 41-day meet will end on Saturday, Nov. 29. We invite you to keep coming back to HorseracingFLA.com for ongoing reports.

Gulfstream is paying all expenses for, and is taking in all revenues for the GP West meet.

GP West Details
Here is additional analysis of the first week of the GP West meet.

Breakdowns of on-site handle and of the components off off-site handle are not readily available for either last year or this year at GP West.

Tent for fans at GP West

But it is probable that less than ten percent of wagers were placed on-site at Calder, especially this year.

For the current meet, Calder and its parent Churchill Downs Inc. are not letting the public into the Calder racing building. Fans can gain cover and access to betting only in two tents that are outside the racing building.

Last October and November patrons were allowed inside, but only to the first floor, to watch live races on TV screens and for simulcast betting.

CDI plans to tear down the seven-story Calder racing building, starting early this December, as part of a non-racing redevelopment for which it has not announced details. Even though the Calder racing season is now limited to two months, CDI continues to own all of Calder and it operates the Calder casino.

During the GP West meet, Gulfstream is open daily from 11 a.m. to about 11 p.m. for simulcasting that includes the GP West races and about 25 other tracks. Patrons can watch and wager in the two air-conditioned simulcast rooms on Gulfstream’s first floor.

It is an open secret that Gulfstream officials would just as soon see the track’s regular fans stay at Gulfstream for the GP West meet.

On GP West races, all bets made at Calder and all bets at Gulfstream are “home track” for Gulfstream for regulatory purposes. The takeout is divided 50-50 between Gulfstream to pay for operations and the Florida Horsemen’s Benevolent and Protective Association for race purses at GP West and Gulfstream.

For GP West races shown at other tracks, such as Tampa Bay Downs, the takeout is split one-third each among Gulfstream, the Florida HBPA and the other track.

* Twenty-nine of this year’s first 60 races were on turf. Two races scheduled for turf, both on opening day Oct. 7, were moved to the main track due to rain.

Last year, 27 of the first 60 races were on turf. No races were taken off the turf.

The Calder turf course, overseen by Gulfstream consultant Bill Badgett and his crew, is drawing raves from trainers.

As always with a Gulfstream product, the turf racing reportedly is proving very popular with simulcast and ADW fans.

With South Florida’s dry season approaching, it is likely that GP West will continue to have a large percentage of races scheduled for turf–and that races will stay on that surface.

Yesterday’s card with a 7.5 average followed a rare stretch of six straight race days in South Florida, which in effect reduced the number of horses available yesterday.

One reason fields are smaller this year is that there are fewer horses stabled at Calder than at this time in 2014. In January, Calder required trainers to take about 700 horses out of Calder barns.

Many horsemen obtained stalls at Gulfstream or among the 430 stalls that Gulfstream has leased at Calder. But some owners were forced to sell displaced horses to buyers in other states.

Horses among the approximately 1,400 stabled at Gulfstream make up the majority of most race fields for the GP West meet.

GP West also is drawing entrants from Palm Meadows in Boynton Beach, the training center affiliate of Gulfstream. In previous years, Palm Meadows was closed from May through mid October. This year, it has been open year-round for stabling of horses.

Gulfstream general manager P.J. Campo has said that, compared with last year, he expects that a larger number of seasonal trainers will send horses from northern states to Palm Meadows by early November rather than later in the month. He has noted that Gulfstream’s year-round racing program is gradually gaining more recognition, and that the turf racing is a prime attraction.

Palm Beach Downs in Delray Beach also is open, and Todd Pletcher is among trainers who already have shipped in some horses.

Through Monday, the meet’s seventh day, Pletcher has three GP West wins and is in a three-way tie for the lead with Marcus Vitali and Rodolfo Garcia.

Pletcher’s horses running at GP West are in the care of staff members led by assistant trainer Anthony Sciametta. Pletcher remains at his Belmont Park base and is preparing horses for the Breeders’ Cup races that will be held at Keeneland in Lexington, Ky., on Oct. 30 and Oct. 31.

All of the above news and developments are leading to expectations that GP West could soon be ahead of last year’s pace in field size as well as handle. 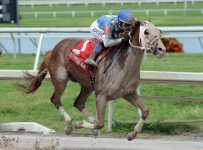