Gulfstream Park will have a stakes-laden 12-race card today with first post time of 12:45 p.m.

There will be six stakes races, including four in the Florida Sire Stakes Series. The main track is listed as fast and the turf course is listed as firm. Scattered thunderstorms are in the forecast for the afternoon.

We will be at Gulfstream and will have stakes previews and race reports on this Web site and on Twitter.

The Sire Stakes races are open to sons and daughters of Florida-based stallions that have been nominated for the program by the breeders’ that own them.

The first legs in the Florida Sire Stakes Series were run on Aug. 8. The third and final legs will be run on Oct. 3.

Rainbow 6
There is a carryover of $578,882 today on Gulfstream’s Rainbow 6, a 20-cent per combination only bet that requires picking the winners of each of the last six races.

That jackpot-like carryover has been growing because the Rainbow 6 has gone 29 race days without being hit by a single winner.

Today, Gulfstream is guaranteeing that the payout will be at least $850,000 if there is just one winning ticket. It is likely that an additional $200,000 will be bet into the Rainbow 6 pool today.

Gulfstream usually pays out the full Rainbow 6 pool (day’s bets plus carryover) only on days when there is just one ticket with all six winners. On other days, after the 20 percent takeout, Gulfstream divides 70 percent of the day’s Rainbow 6 bets among the multiple winning tickets and puts 30 percent into the carryover.

Monday is the final day of the Gulfstream After Retirement Racing Program (GPTARP) portion of Gulfstream’s summer meet. Under state law, Gulfstream cannot continue with any carryovers beyond that date or a similar date in its racing schedule.

The Rainbow 6 carryover has been growing since July 16. That was 29 Gulfstream race days ago, and the last day on which there was just one Rainbow 6 ticket with the winners of all six races. The payoff on July 16 was $164,483.32. 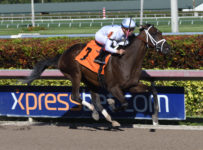