Thursday, Sept. 3 – “Horses to Watch” will be a regular feature of HorseracingFLA.com.

We will focus on horses in several of a day’s races at Gulfstream Park, and later this year at Gulfstream  Park West (Calder) and Tampa Bay Downs.

We have given ourselves a  mythical  bankroll of $1,000 for  the remainder of Gulfstream’s summer meet,  which will  end on Oct. 3, and we will use it for selective mental  bets.

Five of today’s ten races are scheduled for the turf.  Conditions should start out fast and firm. But there is a 50 percent chance of thunderstorms from 3 p.m. to 5 p.m.

The turf course, which had been dry, benefited from the past weekend’s rains. One point of interest will be whether there is a continuation of the recent trend of speed not holding on the turf course.  On Saturday and Sunday, on the course listed  as good, horses coming from off the pace won eight of the nine turf races of 7 1/2 furlongs or longer.

*Fourth race — feature  $62,500 optional claimer for filly & mare sprinters has several win  threats,  including likely favorite Lemon  Point (4).  We’re going with the Marty Wolfson-trained  My Sweet  Dove (2).  She has been  third or better in all seven of her dirt starts (one win) at Gulfstream 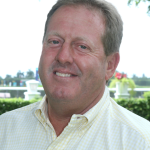 Sixth  race — Joyous Affair (8)  from  the on-a-roll  David Fawkes barn,  is a deserving favorite in this juvenile fillies $50,000 maiden claimer.  My Sangria (5) by the hot first-year sire Gone Astray is a first-time starter that has turned in  some fast workouts and should hit the board.

* Seventh race —  The consistent Cheyenne Nation (3)  dropping in  class  and  trained by Fawkes,  is our pick  in this  one-mile turf  claimer for 3-YO and up.