Sunday, Sept. 13 – On  Saturday at Gulfstream  Park, a drop in class proved to be what stakes veteran  East Hall needed to return to the winner’s circle,

To get there, East Hall (above photo) and rider Tyler Gaffalione had to wait for the stewards’  to not accept a claim of interference by Jonathan Gonzales, the rider of second place finisher Lynx, regarding bumping among several  horses coming around the far turn.

Stakes action will continue today at Gulfstream with  the  $75,000 Three Chopt Road at seven furlongs on dirt for 3-year-olds (details below).

East Hall won the 1 1/16 mile dirt stakes in 1:4323–a fast time on the  track that was sloppy and sealed on a  day with several  heavy thunderstorms

But  he was winless in  seven starts in 2015 before Saturday’s stakes, All of those races were stakes and six were for higher purses than the Sensitive Prince.

Souper Lucky, the  4-5 favorite, finished fifth. Souper Lucky had finished third in three stakes at northern  tracks  this year.  Bettors  apparently felt he was in better form than East Hall.

But in  the winner’s circle Kaplan said he felt that East Hall  “had a class edge” over his rivals on  Saturday.

“He’s won (over) $800,000,” Kaplan said. “He’s been running against some tougher company or on grass. Those were all races where he couldn’t show who he was. He just ran by them today. I’m very happy to see him in the winner’s circle.”

Kaplan said he had no definite plan for the gelding’s next start.

“We’ll play it by ear,” Kaplan said. “We could end up in Kentucky.”

There will be several two-turn stakes for older horses next month at Keeneland in Lexington and in November at Churchill Downs in  Louisville.

As a Florida-bred, East Hall also will have numerous  upcoming stakes  opportunities at Gulfstream and at Gulfstream Park  West (October and  November).

Gulfstream will have 11 races today with first post of 1:15 p.m.

The Three Chopt Road is the  ninth race with scheduled  post of 5:41 p.m.

The formidable team of trainer Stan Gold and owner Jacks or Better Farm will send out two of the favorites in the eight-horse field,  They are Sing Praises, winner of  three stakes races at Gulfstream last year, and Hear That Tune.

Fear the Cowboy, Unbridled Hero  and Aces for John loom  as win threats if the Gold-Jacks or Better colts falter in the Three Chopt Road. 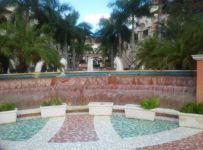