Monday, Aug. 17 — Katie’s Kiss caught Huasca about 20 yards from the wire and went on to win by a half  length in Sunday’s $75,000 Summer Winds Stakes at Gulfstream Park.

Katie’s Kiss (number 4 in photo above) was ridden by Tyler Gaffalione in the five  furlong turf race for 3-year-old fillies.  She won in 59.58 seconds, a very slow time for a turf stakes at that distance.

The course was listed as firm throughout the day. But winning times in the day’s four other turf races were a  second or more slower than what the winners had run in turf races at  Gulfstream earlier this summer.

The win was the first in a stakes for Katie’s Kiss,  who is  owned by Stonecrest Stables and trained by David Fawkes. She has two wins, two second place finishes and a  third place finish in six turf starts at Gulfstream.

The Summer Winds  was the first turf race for Huasca, who this year has  a win and a  second place finish  in dirt stakes at Gulfstream.

Summer Rae  led  through the  slow  first quarter  of 24.54 seconds  Huasca, trained by Efran Loza, Jr.. was four-wide among three other horses that were close to the lead.  Katie’s  Kiss was in fifth, 1 1/2 lengths behind the lead pack.

Katie’s Kiss  swung wide around the turn.  By mid-stretch she and Huasca, ridden by Eddie Castro, were separating themselves from the rest of  the field.  Katie’s  Kiss  then wore down  Huasca for the victory.

“She’s grown,” Fawkes said.  “She’s gotten better all the time. She’s gotten smarter about her training. It’s all upside with her.”

Katie’s Kiss is a daughter. of Kantharos. That horse was the leading Florida-based first-year sire in  2014 with  18 winners.

Gulfstream’s next live race day will be Thursday, when it will have a Rainbow 6 carryover of $271,570.89.  And it could be the  start of a Rainbow 6 frenzy during the four race days between Thursday and Sunday.

On Thursday there  will be ten races with first post time of 1:15 p.m. The Rainbow 6 is on the fifth through  tenth races.  Those races have 66 entrants, including also  eligibles and main track only.

Gulfstream pays out the full Rainbow 6 pool (day’s bets plus carryover) only on days when there is just one ticket with all six winners. On days when there are multiple tickets with six winners, 70 percent of the day’s pool is divided among holders of those tickets and the remaining 30 percent is added to the carryover.

Sunday was the 19th straight race day when there were multiple Rainbow 6 winners.  The last day with a single winner was July 16 for a $164,483 payoff.

Wagering on the Rainbow 6 was $96,802 on Thursday. The prospect of a huge jackpot and of  high payoffs even on days with multiple winners could attract that much betting again on Thursday 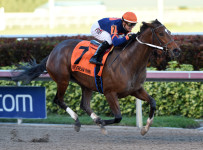