By HorseracingFLA Staff
Thursday, Aug. 13 — Here is what’s on tap at Gulfstream Park this weekend.

There were multiple Rainbow 6 tickets with all six winners on Thursday, with each paying $14,514.18.

Gulfstream pays out the full Rainbow 6 pool (day’s bets plus carryover) only on days when there is just one ticket with the winners of all six races. On other days, it divides 70 percent of the day’s pool among tickets with six winners and puts the remaining 30 percent into the carryover.

It has been 16 racing days since July 16, the last day with just one Rainbow 6 winner. The payoff was $164,183 that day, and the carryover has been building since then.

Thursday’s wagering on the Rainbow 6 was $77,768–in anticipation of a big payoff with or without a jackpot.

The Thursday handle continued the strong recent trend for Gulfstream. Our preliminary research indicates that it has averaged about $5 million a day since the start of its summer meet on July 1. That is an increase over 2014 and places Gulfstream third in handle this summer, behind Saratoga and Del Mar, among U.S. tracks.

“We are very pleased with our handle,” said P.J. Campo, Gulfstream’s vice president of racing and general manager. “Once again, we are seeing the strength of the Gulfstream brand.”

This is just the third season of summer racing at Gulfstream.

Campo said Gulfstream expects the on-track strength of its summer meet and the amount of its summer handle will grow next year, partly because more trainers from northern states are planning to leave some horses in South Florida to race year-round.

* Saturday — Eleven races. The feature is the $75,000 Bonita Stakes at five furlongs on turf for 3-year-olds and up.

* Sunday – Eleven races. The feature is the $75,000 Summer Winds Stakes at five furlongs on turf for 3-year-old fillies. 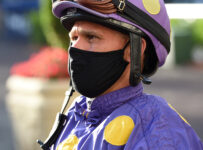