Saturday, August 15–Fans  who go to Gulfstream Park  this afternoon will find the  $75,000 Bonita Stakes, with a  rematch between the up-and-coming turf sprinters Successful Native and Noble Prince.

There will be a tribute after the fourth race to Chuck Streva, the long-time Miami Herald handicapper and racing charts writer  who passed away a year ago this week.

On  July  5, Successful Native beat Noble Prince by a  neck in the  $75,000 Bob  Umphrey Turf Sprint at Gulfstream.

Breitling Flyer finished  third in the  Bob  Umphrey,  4 1/2  lengths  behind the winner, Anyriderill  Do  finished  fourth,  another head  back.  Hold  on Smokey  finished sixth.

All three are back to face stalker Successful Native  and the speedy Noble Prince this  afternoon.

Singanothersong, a Gulfstream dirt stakes veteran, will be making just his second turf start and could seek the early lead,

* Gulfstream has named today’s fourth race in  honor of  Chuck Streva, who passed  away on Aug. 14, 2014 after a long  and courageous  battle with cancer.  He was only 56.

In addition to his handicapping, Chuck  set the morning line at Gulfstream and at Calder. He was best known in the racing industry for writing the race summaries that appear in charts  on the Equibase  and Daily Racing Form Web sites.  He was nationally recognized for his work  and was one of the nicest persons you could  ever meet,

For five years, I was privileged  to have the office  next to Chuck and his highly regarded Equibase colleague Leslie Merrins Sage.  I learned an immense  amount about racing from Chuck and I am proud to be among the legion of  his friends in the Florida racing community.

Members of Chuck’s family will join many  of  his friends  in the  winner’s  circle  after the fourth race.

Gulfstream pays out the full Rainbow 6 pool (day’s bets plus carryover) only on days when there is just one ticket with the winners of all six races. On other days, it divides 70 percent of the day’s pool among tickets with six winners and puts the remaining 30 percent into the carryover.

It has been 17 racing days since July 16, the last day with just one Rainbow 6 winner. The payoff was $164,183 that day, and the carryover has been building since then.

The Rainbow 6 is  a 20-cent only per combination be.

Friday’s wagering on the Rainbow 6 was $83,694–in anticipation of a big payoff with or without a jackpot.

Past experience for Saturdays with growing Rainbow 6 pools indicates that  $150,000 or more could be  wagered on it today–a  combination of live  and  off-site  betting.

The Rainbow 6 begins  on the sixth  race, with scheduled  post of 3:46 p.m.–and as often in the summer there is the  prospect of foul weather.

Heavy rain was fell at Gulfstream in Hallandale Beach early this morning, but skies had cleared  by  10:15.   And  isolated  thunderstorms are in  the  forecast  throughout the day.

In the Rainbow 6, the seventh and ninth races are  scheduled for the turf.

If races are taken off the turf, the better alternative for Gulfstream and bettors is for  that to happen before the start of the Rainbow 6,  Pick 5 and  Late Pick  4.

Those who bet  on Can Can Lady would  have preferred  the alternative fall-backs of  consolation payoffs or substituting the post time favorite for scratches.

There are merits for those two systems and for  Gulfstream’s  system.  That  is  fodder  for  another story

For today, the hope  is for clear  skies for a  challenging card.  The Rainbow 6 races have 69 entrants, including main trac 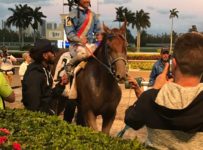