by Jim Freer
Adrienne’s Warrior lived up to big expectations on Thursday with a four-length victory in his career debut at Gulfstream Park.

The 2-year-old son of Warrior’s Reward  took the lead entering the turn and went on to win the six-furlong dirt race in 1:12.54 without any serious challenge. Jockey Luca Panici’s main task in the final furlong was keeping Adrienne’s Warrior from drifting to the right. Woodburn finished second in the seven-horse field.

The result puts Adrienne’s Warrior on the early list of top two-year-old prospects in South Florida.

Adrienne’s Warrior was 3-1 in the morning line. He went to post at 3-5 as bettors focused on several fast recent workouts at the Palm Meadows training center in Boynton Beach and on his breeding.

Adrienne’s Warrior is a Kentucky-bred son of Warrior’s Reward and is out of the A.P. Indy mare First Lady Blue.

“He did everything the way I thought he would,” said Nihei, who also is the exercise rider for Adrienne’s Warrior. “He’s been the kind of horse that I’ve never been able to pair up with anybody that makes him work. Everything just comes easy to him, so when they hit the stretch and there was nobody with him, I had a feeling that (drifting) would happen.”

She added: “You sort of have to stay busy and keep him focused, because otherwise he’s not going to concentrate. So I have to work him a little differently. I have to keep him in a situation where he comes from behind horses. Most of what you saw today is what he does in the mornings.”

Gaffalione leads the summer meet jockey standings with 37 victories. Hernandez is second with 31. Panici has eight wins and is in tenth place.

Gulfstream will have ten races today with first post of 1:15 p.m. There will be a carryover of $297,755.46 on the Rainbow 6. It is a 20-cent only per combination bet, and today is on the fifth through tenth races.

Today’s Rainbow 6 races are all claiming or optional claiming. They have 59 total entrants.

On Thursday there were approximately 50 tickets with all six winners. Each paid $1,194.10. That money was from a very large weekday betting pool of $104,129.

The payoff was relatively low because four of the Rainbow 6 races were won by favorites and the highest odds winner was at 7-2.

Gulfstream pays out the full Rainbow 6 pool (day’s bets plus carryover) only on days when there is just one ticket with all six winners. On other days, Gulfstream divides 70 percent of the day’s Rainbow 6 bets among the multiple winning tickets and puts 30 percent into the carryover.

It is likely that $100,000 or more will be bet on the Rainbow 6 today. Betting should be even larger on Saturday and Sunday if there are still carryovers. 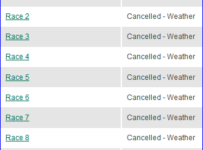