Monday, Aug. 31 –There will be a carryover of $509,085 in the Rainbow 6 when Gulfstream Park resumes racing on Thursday.

The Rainbow 6 is a 20-cent-only per combination bet on each day’s last six races. On Sunday there were no tickets with all six winners in the Rainbow 6. So the 26 tickets that had the winning horse in five of the six races became winning tickets, with each receiving $2,451.68.

Picking winners in all six races was harder than usual on Sunday. Only one favorite won a Rainbow 6 race, and three winners had odds of 10-1 or higher.

Gulfstream pays out the full Rainbow 6 pool (day’s bets plus carryover) only on days when there is just one ticket with all six winners.

On other days, after the 20 percent takeout, Gulfstream divides 70 percent of the day’s Rainbow 6 bets among the multiple winning tickets and puts 30 percent into the carryover.

Basically, on multiple winner days, 56 percent of the day’s new Rainbow 6 bets is distributed among winning tickets and 24 percent goes into the next day’s carryover.

Using the above formula, the jackpot payoff would have been about $573,000 if there had been just one wining ticket. But with multiple winning tickets, $27,319 was added to the carryover–making it $509,085 for Thursday.

The Rainbow 6 carryover has been growing since July 16. That was 27 Gulfstream race days ago, and the last day on which there was just one Rainbow 6 ticket with the winners of all six races. The payoff on July 16 was $164,483.32

Despite the often heavy rains of the last three days, Gulfstream did not take any races off the turf on any of those days.

In fact, the turf course needed some rain following what had been a very dry summer. Some parts of the course had grass beaten down and there was some dirt kickback.

But Gulfstream has been able to keep averaging about four turf races a day by keeping the portable rail at a different distance each week on the very wide turf course.

Keeping Sunday’s races on turf was a big factor in another strong wagering day. Gulfstream had all-sources handle of $4,350,149 according to Equibase Co. charts.

Preliminary data from Gulfstream and our own review of charts indicate that Gulfstream’s daily average all-sources handle is in the $5 million range for its summer meet that began July 1 and will end Oct. 3.

*First post during the summer meet usually is 1:15 p.m.

On that Saturday, Gulfstream will have eight stakes races including the second legs of the four divisions of the Florida Sire Stakes Series. Mondays are usually dark at Gulfstream. But it will have a Labor Day race card on Sept. 7. 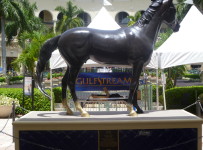