Sunday, Aug. 30 – Apprentice jockey Harry Hernandez may be out of action for as long as two months with a broken left wrist sustained in a racing mishap in Friday’s 10th race.

Hernandez, a 18-year-old Puerto Rico native, sustained the injury after being unseated when his mount, Starship Muffy, stumbled and fell onto the turf course.

“It’s part of the job,” Hernandez said. “I might be out two months.” 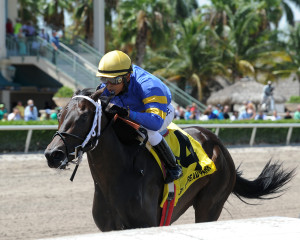 In his first year of riding, Hernandez has ridden 103 winners from 625 mounts. He has ridden 36 winners during the summer meet and is second behind Tyler Gaffalione.

In  above photo, Hernandez is riding It’s High Time to victory in the Desert Vixen Stakes at Gulfstream on Aug. 8. 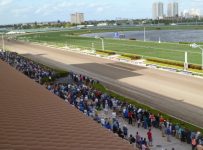