The Summer Winds  is the fifth  race with a scheduled post of 3:27 p.m.

Katie’s  Kiss is the 5-2 morning line favorite.  She has finished third or better in four of her five  turf starts at  Gulfstream  this year.

Gulfstream will have  eleven  races with  first post at 1:15 p.m.

Multiple tickets with all six winners were each worth $6,463.68 Saturday

The Rainbow 6 pool (day’s bets plus carryover) is paid out only when there is a single unique ticket sold with all six winners. On days when there is no unique ticket, 70 percent of that day’s pool goes back to those bettors holding tickets with the most winners, while 30 percent is carried over to the jackpot pool

* On Saturday. Do the Roar crossed the finish line first by a neck in the $75,000 Bonita Stakes but was disqualified for interference near  the finish line and placed second behind Singanothersong

Successful Native, the even money favorite, finished third  by two lengths in the five furlong turf stakes  for 3-yearolds and up.

Noble Prince, who wound up  fifth in the nine-horse  field, led until mid-stretch and was tracked by Do the Roar in second and Singanothersong in third.

Following a stewards’ inquiry and an  objection  filed  by Singanothersong’s rider Emisael Jaramillo against Dothe Roar’s rider Ramsey Zimmerman, the stewards reversed the order of  the first two finishers. disqualified  Do the Roar  and  placed  him second. 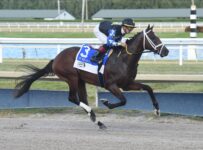