Tuesday, Aug.25 — Gulfstream Park-based trainer Henry Collazo said on Tuesday that he will run his unbeaten 2-year-old colt Bullet Gone Astray in the $350,000 Hopeful Stakes (Grade 1) at Saratoga on Sept. 7.

The Hopeful is seven furlongs on dirt and each year is a feature on the Labor Day meet-closing card at the Saratoga Springs, N.Y., track. The field likely will have several of the top horses from this summer’s 2-year-old stakes races at Belmont Park and later at Saratoga.

“This is a step up, but we decided to give it a go,” ”Collazo said. “He’s done everything right so far, and hasn’t really been tested.”

Bullet Gone Astray’s first of two wins came in a maiden special weight race at five furlongs on a sloppy track at Gulfstream on June 28.

His second victory (above photo) was by nine lengths in the $100,000 Mountaineer Juvenile at Mountaineer Park in Chester, W. Va., on Aug.1. That six furlong race was on a fast track.

Collazo and Bullet Gone Astray’s owners took the colt to West Virginia and are going to Saratoga for a stakes because he is not eligible for the Florida Sire Stakes Series at Gulfstream. Early this year, his breeders inadvertently missed a deadline for a sustaining eligibility payment.

“We would have stayed here if we could run in the Sire Stakes,” Collazo said.

(Editor’s Note: We will expand on this story later today) 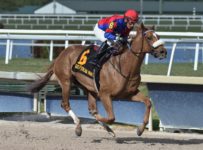